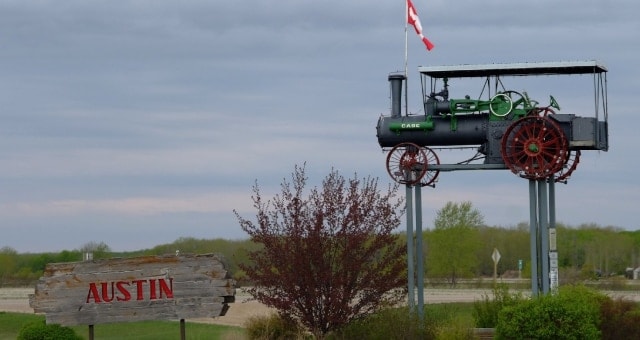 The view when driving into Austin– Manitoba, not Texas. (Photo: mapio.net)

In the rural Manitoba town of Austin, a 23-year old man was injured after taking fragments to the face while sitting ’round a holiday camp fire.

As noted by Wiki, Austin has an elementary school, a postal office, a curling/hockey rink, two grocery stores and a credit union. About an hour’s drive outside of the metro Winnepeg area, it’s a quiet little community by most accounts. That is, unless you cast some .22 cartridges into the fire whilst enjoying the heat and light from it.

As noted by CJOB AM radio, five individuals were gathered around the flame early Saturday when someone started throwing rounds into it. One of the cartridges exploded and hit a 23-year-old man in the eye.

He is in stable condition but an unidentified 21-year-old man was taken into custody by the Mounties.

The incident occurred during the Canada Day (Fête du Canada) weekend, a federal holiday that celebrates Canada’s creation from a bunch of colonies into the Maple Leaf loving folk we know today.

It is thought by the RCMP that booze may have played a factor in the incident.