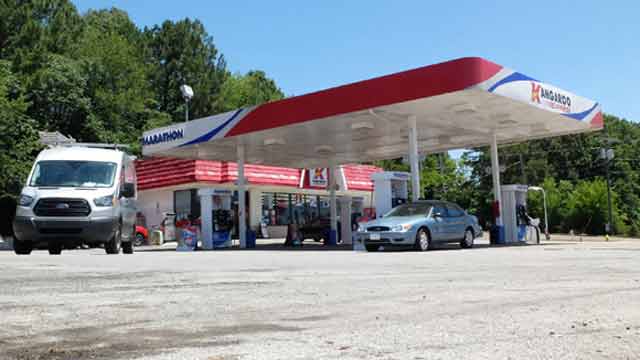 The day after the robbery and attempted abduction, it was business as usual at the Kangaroo gas station. (Photo: Times Free Press)

A woman who was being held hostage during an armed robbery at an East Ridge, Tennessee, convenience store, was saved by a customer who was armed with a gun.

Police say the suspect entered the Kangaroo gas station around 1:45 a.m. on Thursday, June 30. He was carrying a large knife and demanded cash and what was described as a large amount of cigarettes from the clerk. The clerk complied with the robber’s demands and gave up the items. But as the suspect was leaving, he grabbed the female clerk and forced her to go with him. According to reports from a local ABC affiliate, the suspect threatened to kill the clerk as he dragged her away.

As the two were exiting the store, a customer was just arriving and noticed the woman struggling with the man. The customer, accurately believing the situation to be a robbery and attempted abduction, went back to his vehicle and retrieved a gun. The customer then confronted the suspect, and at some point during the confrontation fired a single shot, striking the suspect in the torso.

When first responders arrived on the scene, the suspect was found lying on the ground, suffering from a gunshot wound. He was transported to the hospital, but later died from his injuries.

Police have not yet released the name of the suspect, pending notification of next of kin. Capt. Tim Mullinax with the East Ridge Police Department said the suspect has been identified, but they have had difficulty locating the next of kin.

According to the Times Free Press, Mullinax said the suspect, who had a prior criminal record but no dealings with local law enforcement, had been in the store before, but never caused a problem.

The armed citizen’s name has not been released either, but Mullinax confirmed he wasn’t likely to face any charges.

The clerk who was taken hostage, nor the armed citizen, were physically injured during the incident.