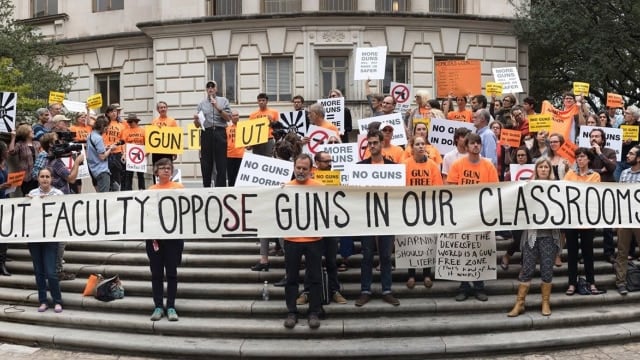 Three female professors at UT Austin have filed suit over a campus carry law to take effect next month, arguing in part that it would limit their ability to talk about controversial subjects. (Photo: Gun Free UT)

With gun free zones on Texas colleges and universities set to change next month, three UT professors have filed suit against the state on free speech, due process and equal protection grounds.

Last year Republican Gov. Greg Abbott signed SB 11 to allow licensed holders to concealed carry their handguns on college campuses while granting university presidents the ability to carve out some areas that will remain gun free zones. In response, schools such as the Texas A&M and Texas State have opted to implement new guidelines after much debate and public discourse that include, among others, restrictions on carry in student housing.

UT in Austin in February chose to allow partially loaded guns in class and ban them in dorms and other locations despite threats of legal action from faculty who were in opposition.

Now with the law set to kick in August 1, three professors have kept their promise and filed suit in federal court Wednesday naming Texas Atty Gen. Ken Paxton, UT President Gregory Fenves and members of the Board of Regents in their official capacity, as defendants seeking a federal injunction on campus carry.

Attorneys for the faculty members argue that concealed carry permits in the Lone Star State are lacking.

“Handgun regulation in Texas and nationwide is notoriously weak and inefficient, with gaping loopholes and outright voids. The consequence is that, in Texas, the carrying of hand- guns is not ‘well-regulated’ within the meaning of the Second Amendment because there has not been the imposition of proper discipline and training,” read court documents.

Further, they contend the state legislature acted recklessly in passing SB 11 and their rights to free speech are hindered by a mandate by the college to allow lawful concealed carry in their classes.

“Compelling professors at a public university to allow, without any limitation or restriction, students to carry concealed guns in their classrooms chills their First Amendment rights to academic freedom,” contends the suit– going on to explain that Glass, in particular, fears for her safety as she covers topics such as abortion and unwanted pregnancies.

“She has witnessed in her own classroom a verbally aggressive student, disappointed in a grade handed out during class, displaying a level of animosity and aggressiveness toward Professor Glass’s teaching assistant that, had the current concealed carry rule been in place, would have left her hesitant to confront the student in defense of her teaching assistant and urge a reasoned discussion of the matter at hand,” argues the filing.

Moore, who teaches a class on LGBT Literature and Culture, and Carter, who teaches, “controversial topics such as imperialism and power structures related to sexuality and gender” have similar concerns.

Further, they go on to argue that since they cannot exercise their individual option to forbid handguns in their classrooms under the “well-regulated” clause of the Second Amendment, their due process and equal protection rights are being trampled.

Gun Free UT, a group of faculty, students and alumni in opposition to the university’s new campus carry policy, supports the actions of the professors.

Second Amendment groups, on the other hand, are stunned.

“It boggles my mind how people so ignorant of history, so disrespectful to liberty, and so utterly offensive to intelligence get jobs teaching at one of the best colleges in the nation,” Open Carry Texas President CJ Grisham told Guns.com Wednesday. “These professors are wasting their time and government tax dollars fighting on such a laughable and embarrassing premise.”

Grisham took particular exception to the fact that the preamble of the professors’ suit references the upcoming 50th anniversary of UT mass murderer Charles Whitman who on August 1, 1966 climbed the 28th-floor observation deck of the Main Building on campus and killed 16.

Author Chris McNabb, in his book “Deadly Force: Firearms and American Law Enforcement, from the Wild West to the Streets of Today” credited numerous armed civilians on and near the campus with forcing Whitman to seek cover, saving lives by limiting his field of fire during the event.

“The anniversary, though I’m sure not intentional since August is when school starts in Texas as it has every year, is actually quite symbolic and I’m perplexed that not a single Professor has mentioned this,” said Grisham. “In reality, I know it’s because they prefer to reinvent history to suit their agenda. 50 years ago, students with guns were able to suppress Whitman’s killing spree. Armed students on campus, 50 years ago, assisted law enforcement in taking Whitman down and preventing more casualties. So, it’s fitting that the day campus carry takes effect is the day students can again arm themselves in self-defense.”

The professors are seeking a mandatory injunction permanently prohibiting any state statute, rule, regulation, or policy compelling them to allow the concealed carrying of handguns in their classrooms, as well as legal fees.