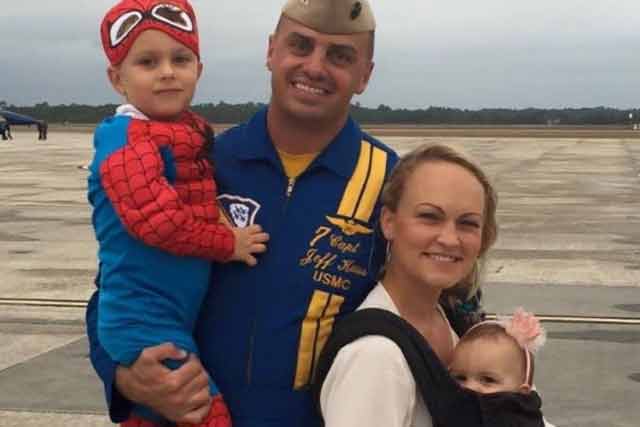 People from all over the world have pooled together over $375,000 for the family of U.S. Navy Capt. Jeff Kuss, the Blue Angels pilot who was killed when his jet crashed last month.

Capt. Kuss was participating in a pre-show warm-up in Smyrna, Tennessee, when his F/A-18 went down. Multiple witnesses captured video footage of the fiery fall and the explosion and black mushroom cloud that followed. An investigation into what caused the crash is still underway.

Capt. Kuss left behind a wife, Christina, and two small children, 4-year-old Calvin and 1-year-old Sloane. A Go Fund Me account with a goal of $500,000 was set up to ensure Kuss’ wife and children would be taken care of. Thus far, over 75 percent of that goal has been met.

“Navigating life without Jeff is terrifying and overwhelming,” Christina said on the fundraising page, “but I feel your love and appreciate this support more than I can say.”