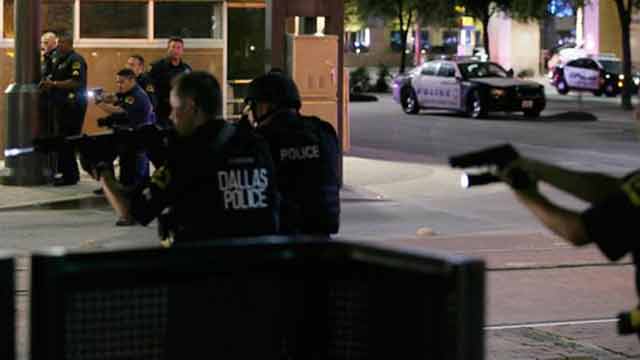 Peaceful protests were interrupted by the sound of rapid gunfire just before 9 p.m. (Photo: ABC)

At least 10 police officers were shot, five fatally, Thursday night in Dallas during what authorities are saying was an ambush aimed at police officers.

Hundreds gathered in the city, marching their way through the downtown area during a planned protest of recent police shootings. The protests, which were previously planned in corroboration with the Dallas Police Department and being monitored by both uniformed and undercover officers, had remained peaceful throughout the night. But just before 9 p.m., gunfire erupted and chaos ensued.

According to witness accounts, the volley of gunfire was carried out by multiple suspects lasted about three to four minutes. During that time, an estimated 75 to 100 rounds were fired, although at this point it isn’t known how many rounds were fired by the suspects and how many came from law enforcement.

During the exchange, at least 10 officers were shot. Early reports indicated that two of the officers could be seen lying lifeless on the street. The injured officers were transported to the hospital, where several remain in critical condition. While the officer death toll originally started at two, by 4 a.m. Friday, the Dallas Police Department confirmed five officers died after succumbing to their injuries. There have been no reports of any civilians being shot.

Dallas Police Chief David Brown said in a press conference around midnight that one female suspect was in custody and two others, who initially fled from the scene in a Mercedes, were later found and also placed in custody. All of the suspects are being interviewed by detectives.

Chief Brown also confirmed that a fourth suspect was engaged in a standoff with authorities at a downtown parking garage. Brown said shots were exchanged between officers on the scene and the suspect was described as not being cooperative.

Brown said during the negotiations the suspect said “the end is coming” and that more officers would be hurt and others killed. The suspect also indicated that numerous bombs had been planted around the parking garage where the standoff was occurring, as well as throughout the downtown area. The bomb squad was called in, but there was no immediate word on whether any bombs were found.

At midnight, the standoff had been underway for nearly an hour, and as of 4 a.m., the police department had not provided any additional updates on that situation. Brown did not expressly state there was danger to Dallas-area residents, but did say he was not confident they had all of the suspects responsible for the ambush in custody.

Brown said they believed numerous people were involved in the execution of the ambush, and that they were armed with rifles and at “triangulated positions at different points in the downtown area.” Brown added the suspects appeared to have knowledge of the protesters planned route, as they were strategically positioned along that path.

I’ve never been more proud of a police officer and being a part of this great, noble profession. Seeing the courage, the professionalism, and just the grit to stay on scene in an area, looking for suspects, knowing that we are vulnerable. We don’t know where they are, and our downtown is very large with a lot of high buildings. And some of the stories I’ve heard from officers, talking about what happened, running toward gunfire to help the injured officers, to help get them transported to the hospital by patrol car, not having the time to wait for an ambulance, there’s just so many stories of great courage.

Brown asked for continued prayers, support and encouragement from the public as some of the officers still fight for their lives. “We continue to fight the good fight, to bring this to a conclusion,” he said.

Dallas Mayor Mike Rawlings, who called the incident heartbreaking, said they have already spoken with officials from the governor’s office, as well as the White House, and that both have extended their willingness to aid in the investigation in whatever way is needed.

“To say that our police officers put their lives on the line every day is not hyperbole. It’s a reality,” Rawlings said. “We as a city, we as a country, must come together, lock arms and heal the wounds that we all feel from time to time. Words matter. Leadership matters at this time.”