Is it racism or something else at the root of police shootings? 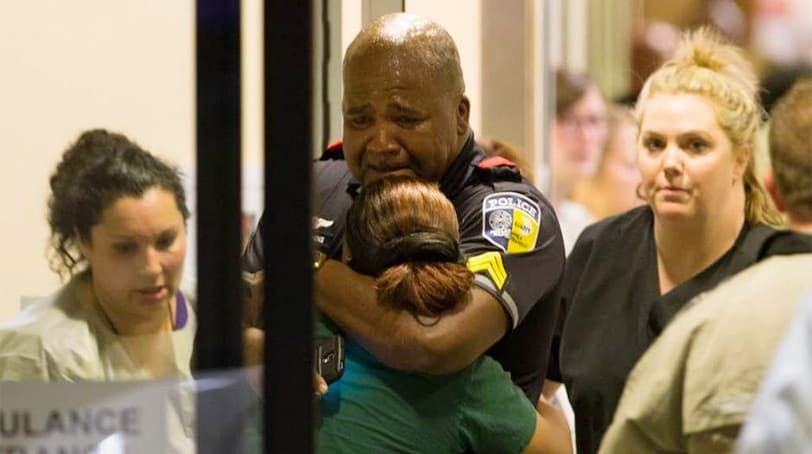 It’s been called an act of terror, an ambush, while others have characterized Thursday’s deadly mass shooting in Dallas as an indication of a breakdown in police-community relations. Others still have said there needs to be systemic change in police departments across the country – foremost with a move away from militarization.

“We live in a country increasingly affected by not only a military-industrial complex but also a prison-industrial complex,” said Kathy Kelly, co-coordinator of Voices for Creative Nonviolence, a campaign to challenge U.S. military and economic violence, in an email to Guns.com. “Within both ‘complexes’ government salaries and corporate profits are rooted in maintaining the status quo. And, the status quo includes a racist criminal justice system and imprisonment system.”

Though police officers were reportedly the intended targets — some news outlets reported at least two civilians were also wounded. The Dallas Police Department early Friday morning said a fifth officer had died and reports are claiming up to 12 officers were shot during the deadly incident, which occurred during a Black Lives Matter protest staged in response to two police shootings of black people in Baton Rouge, Louisiana, and Falcon Heights, Minnesota, this week.

Guns rights groups, including the Second Amendment Foundation and the National Rifle Association offered their condolences to the families of the slain officers.

“If this was some sort of hate crime, that hatred was unleashed against all Americans,” said Alan Gottlieb, SAF founder and executive vice president, in a statement. “We know there are deep divisions in America today. Murder is not the way to solve that, and neither is political exploitation.”

Prompted by criticism over the group’s apparent silence in the case of a black man fatally shot by police in Minnesota while legally carrying a concealed handgun, the NRA said it would wait to comment until more facts came to light in the ongoing investigation.

Former Rep. Joe Walsh levied a threat against President Barack Obama, arguing on social media Friday that the violence and hatred toward police is the president’s fault.

“This is now war. Watch out Obama. Watch out Black Lives Matter punks. Real America is coming after you,” Walsh tweeted, as reported by Roll Call.

During his latest press conference Friday, Dallas Police Chief Davis Brown said that before the police negotiator determined the situation out of hand, he was able to get the suspect to speak. The man was sympathetic to the Black Lives Matter movement and upset about the recent police shootings this week, Brown said. The suspect was also upset at white people and wanted to kill them, especially white officers.

Though Dallas isn’t the first case of a person targeting police either out of frustration or even self-defense, it is possibly one of the first cases of a local law enforcement agency using a robot to kill a suspect, as Popular Science reported.

Brown explained that his officers used a remote-controlled robot to detonate a bomb close to the suspect, killing him in the blast.

He said it was after several hours of failed negotiation and an exchange of gunfire that police decided to use the bomb instead of exposing officers to danger. The bomb disposal robot is typically used to defuse explosives that could potentially otherwise cause serious harm to or kill an officer.

According to records maintained by Bard College in New York, the Dallas County Sheriff’s Department acquired an MARCbot for $10,000 in 2014 and officers reportedly used it to defuse ordinance during a shooting last year, though it was not used on the suspect.

This latest unconventional means of policing raised the eyebrows of those who witnessed the federal government’s attempt to rally around community-oriented policing after criticism surfaced about local law enforcement agencies across the country spending millions of dollars on surplus military gear.

When all eyes were on Ferguson, Missouri, following the fatal police shooting of black Michael Brown by white officer Darren Wilson almost two years ago, the police response to the resulting civil unrest was anything but community-oriented and more closely resembled a military occupation.

“As it is said, if you have it you will use it,” said Graylan Scott Hagler, Pastor at the Plymouth Congregational United Church of Christ in Washington, D.C. and chairperson of Faith Strategies. “But it also makes the police look like an occupying army which is the way that it is perceived by a significant portion of the population. Nothing has changed since Ferguson or before Ferguson.”

For Hagler, it boils down to race relations, which he said is at its lowest since the peaceful time of segregation in the U.S.

“There is the misguided and ill-informed perspective that white privilege has been displaced ever since the election of President Obama,” Hagler told Guns.com in an email. “[Donald] Trump and his shrill xenophobic and racist rhetoric has fueled the flames of white racial misinformation. The shooter in Dallas obviously had no constructive ways to deal with his own rage and the results manifested itself in this fashion. It is unfortunate and cannot be justified, but neither can police shootings of Black people without penalty be justified either. This is where the rage comes from. Black persons one after another are killed with impunity.”

Though the percentage of black police officers across the country is on par with the group’s overall makeup in the population – 13 percent according to the Bureau of Labor Statistics and the U.S. Census – some have argued police departments sometimes don’t mirror the communities they serve.

Kelly, however, sees the federal government and its military spending as the root of the problems faced by the black community and others who are marginalized by society.

“The Department of Defense, a wide variety of ‘security’ contractors, the prison industry and the local police force commandeer vast resources in terms of funding, ingenuity and problem-solving capacities. What is left for the groups that don’t rely on threat and force to solve problems?” said Kelly, who is also a part of the Catholic Worker movement, which sends its people out to “seedy” parts of towns or cities in the U.S. on peace-keeping missions.

None of them carried guns, Kelly said.

“How do people distinguish themselves as successful trainees in police academies? I think willingness to use threat and force must be considered normal. I can imagine that people feel traumatized at some point during their own training. Could a different sense of security be developed?  Unquestionably. Not so long ago, teachers used corporal punishment and brute force on their students. That doesn’t happen anymore,” Kelly said.