Reactions to Dallas rush past race, onto gun violence 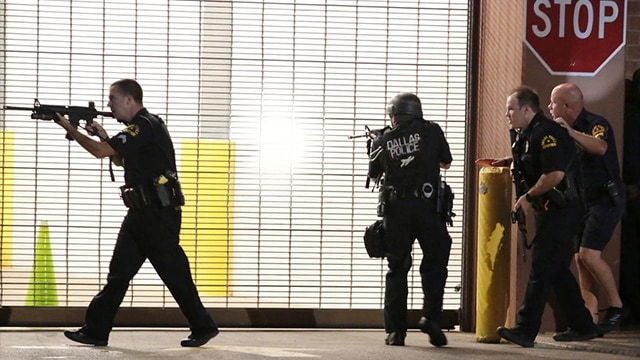 Dallas police respond after shots rang out during a protest. (Photo: AP)

As Americans awoke Friday morning to the news that five officers were killed and seven others injured in a targeted attack against Dallas police, political advocacy groups reminded citizens that the real enemy was gun violence, not blacks.

The call to end gun violence raised to a fevered pitch on Friday after one of the worst attacks against law enforcement since 9/11 unfolded on the streets of Dallas late Thursday evening.

What started as a peaceful protest in response to the fatal shootings of black men in Louisiana and Minnesota by police earlier in the week, devolved into chaos as shots rang out and police officers came under a barrage of bullets.

The Congressional Black Caucus told reporters during a press conference that the Black Lives Matter movement should not take the blame for the atrocities. Instead, CBC Chairman G.K. Butterfield (D-N.C.) told reporters the lack of gun legislation is the real culprit behind this massacre. The organization vowed to continue to rally for change on Capitol Hill.

“We are continuing our fight to remove guns from the hands of would be terrorists and criminals and require background checks for those seeking to purchase firearms,” Butterfield said. He went on to challenge Republicans warning that a failure to pass gun legislation soon would result in a “long, hot summer.”

Black Lives Matter reacted on Twitter saying the group advocates for dignity, justice and respect through peaceful protest. The organization later issued comments decrying the events. The group said the focus should be on violence, not blacks, as the real enemy.

“As we have done for decades, we marched and protested to highlight the urgent need to transform policing in America,” the group said. “Black activists have raised the call for an end to violence, not an escalation of it. Yesterday’s attack was the result of the actions of a lone gunman. To assign the actions of one person to an entire movement is dangerous and irresponsible.”

The Texas chapter of the American Civil Liberties Union quoted the late Martin Luther King, Jr. before condemning violence as the cause of grief in all three shootings.

“We are reminded of the words of Dr. Martin Luther King: ‘Violence is impractical because it is a descending spiral ending in destruction for all.’ Over the past three days, the body count has risen to seven,” a statement posted on the ACLU’s website read.

The group pointed to Alton Sterling and Philando Castile’s deaths before turning attention to last night’s incident. “The five Dallas police officers did nothing to warrant their deaths. Add to that the more than 50 officers killed in the line of duty and the 121 Black people killed by law enforcement earlier this year, and it’s clear that the violence is escalating. How much is enough?”

Gun advocates on both sides wasted no time in jumping in on the conversation.

President of Everytown for Gun Safety, John Feinblatt, pointed a heavy finger at guns saying the surrounding culture and easy access led to the deaths of officers. Feinblatt went on to note the weeks’ previous shootings in Louisiana and Minnesota illustrate how gun violence consistently takes center stage in the U.S.

“What we do know is that they are all a part of the terrible portrait of gun violence in America. Each of the lives that were cut short in these horrific events this week is part of the daily toll of gun violence that kills 91 Americans and injures hundreds more,” he said in a statement.

Gun supporters overwhelmingly offered prayers and support to Dallas police. The National Rifle Association’s Executive Vice President Wayne LaPierre extended his condolences to the families of the fallen officers and applauded the efforts of police who ran towards gunfire to save others. His comment was notably mum on the topic of gun legislation.

Second Amendment Foundation’s Alan Gottlieb wasn’t as quiet on the issue. In a press release, the founder and executive vice-president said the person or persons involved bear the responsibility.

“There can be no justification for this cowardly act, but we are confident there will be justice,” he said. “At the same time, we abhor any attempt to exploit this hateful crime, which appeared to target police, to press a political agenda that would penalize millions of law-abiding American citizens.”

Those close to the investigation shied away from mentioning guns or gun violence, focusing solely on encouraging support and safety to citizens and officers. Mayor Mike Rawling expressed his number one priority of the city right now is to ensure the safety of its residents.

Standing alongside Rawling Friday morning, Chief of Police David Brown conveyed his sorrow over the incident, but told reporters that Americans should stand behind law enforcement during this time of grief.

“Please join me in applauding these brave men and women who do this job under great scrutiny, under great vulnerability. Who literally risk their lives to protect our democracy. We don’t feel much support most days. Let’s not make today most days. Please we need your support to be able to protect you from men like these who carried out this tragic, tragic event,” Brown said.

Texas Governor, Greg Abbott, mandated all flags be flown at half-staff until July 12 to honor shooting victims. He urged Texans to remember the sacrifice made by local officers and pray for those involved.

“I ask everyone to keep the families of those who lost their lives, as well as those who have been seriously injured and the entire Dallas law enforcement community, in their thoughts and prayers during this difficult time,” he said in a letter posted to his website.

The President, speaking from a podium in Warsaw, Poland, pledged federal support in the ongoing investigation. While Obama didn’t outright call for increased legislation, there was a clear an anti-gun tone to his closing remarks.

“We also know that when people are armed with powerful weapons, it unfortunately make attacks like these more deadly and more tragic and in the days ahead consider those realities as well,” he said.