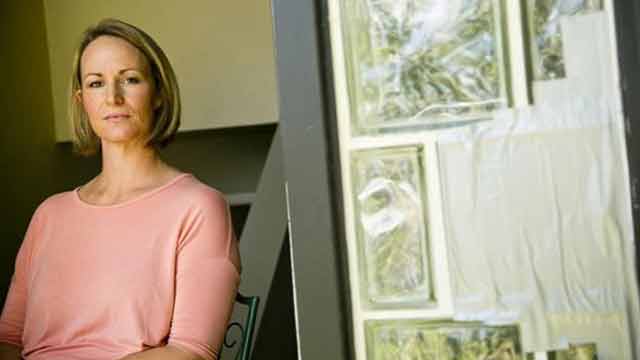 Julie Dietz was left with shattered windows and a bullet-riddled home, but was not injured. (Photo: Kyle Green/Idaho Statesman)

A teen boy was shot by his mother’s ex-boyfriend in their Boise home last month, but when the family sought the help of their neighbor, a corrections officer who was off-duty at the time, the woman stepped up to the plate and protected her neighbors until police arrived.

The incident occurred on June 28, but Julie Dietz spoke with reporters from the Idaho Statesman just this week about the incident.

Dietz said she had taken her 13-year-old son to a friend’s house and just settled in on the sofa to watch TV around midnight. She was just starting to doze off when she heard yelling outside. When she went to the door, she saw her teen neighbor running toward her, screaming. At first, Dietz thought the boy was on drugs, but soon realized he was injured and bleeding badly. The teen was also holding a handgun, which Dietz said it was obvious he had no experience with by the way he held it.

Dietz took the gun from the teen without incident. Immediately, he fell to the ground, presumably from the loss of blood, and moments later, Dietz heard more yelling. She looked over to see the teen’s mother and sister also running toward her home, all the while screaming about a man with a gun who was going to kill them. Confused, Dietz was thinking she had taken the gun from the teen and there was no longer a threat, but quickly realized the gun in the teen’s possession was one he had taken from the man who was chasing them, his mother’s ex-boyfriend.

Apparently the woman broke up with the man, but he did not take it well and they became involved in a physical altercation. During the altercation, the woman’s son wrestled the gun from the man, and that’s when he was shot twice – once in the chest and once in the hand. However, the suspect was armed with more than just a handgun.

Dietz said the suspect, who was later identified as Alan Amundson, 53, also had an AR-15 type rifle and lots of ammunition. She said once she got her neighbors into her basement for safety, Amundson never tried to get into her home. If he had, Dietz was armed and ready. She said she contemplated engaging Amundson, but knew she was outgunned and chose not to.

Amundson stayed near his truck outside and, although he shot at Dietz’s home, did not try to enter.

Amundson shot one of the responding officers, whose bullet-proof vest absorbed the impact, then he fatally shot himself. The teen was rushed to the hospital and has since been released. Dietz, however, said the boy saved his mother’s life.

“I was ready to protect us, if necessary. I can’t imagine how much worse I would be feeling if I didn’t have my own handgun … I would have been sitting there waiting for him to finish us off,” Dietz said. “So that I’m very thankful for.”

However, Dietz also said she plans to purchase a rifle.