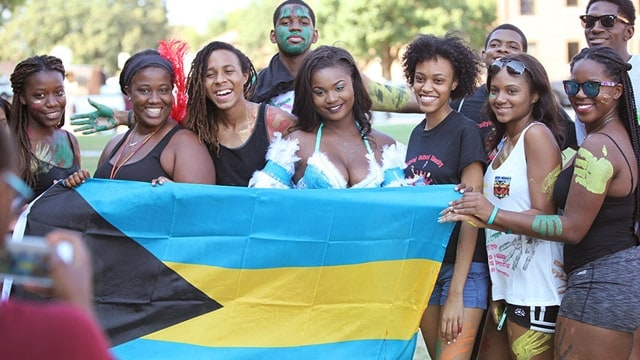 A group gathers before the Caribfest Parade to take a group photo with a flag of the Bahamas on Sept. 25, 2015. (Photo: The Wichitan)

Due to recent high-profile police shootings of black men, the Bahamas’ Ministry of Foreign Affairs and Immigration issued an advisory warning young black Bahamians to be careful when traveling to the U.S.

“We wish to advise all Bahamians traveling to the US but especially to the affected cities to exercise appropriate caution generally,” the Ministry said in a statement on July 8.

“In particular young males are asked to exercise extreme caution in affected cities in their interactions with the police. Do not be confrontational and cooperate,” the statement continued.

The statement came two days before the country’s Independence Day, on July 10.

Eighty-three percent of Bahamian’s total population — more than 320,000 — is black.

Earlier in the week, two black men were shot to death by police in situations that involved cameras. In both instances, the men appeared to be unarmed.

On July 6, a disturbing video had been live streamed on Facebook showing a man, Philando Castile, 32, bleeding to death in the driver’s side of a car as an officer points his a gun at him. He allegedly was reaching to show the officer his concealed carry license when the officer shot him. Castile’s girlfriend and her four-year-old daughter witnessed the shooting.

On July 5, 37-year-old Alton Sterling was shot several times after being tackled and pinned to the ground by two Baton Rouge policemen. The officers were responding to a report that man was outside a convenience store selling CDs and threatened a patron with a gun. Local authorities called the feds to investigate any possible civil rights violations.