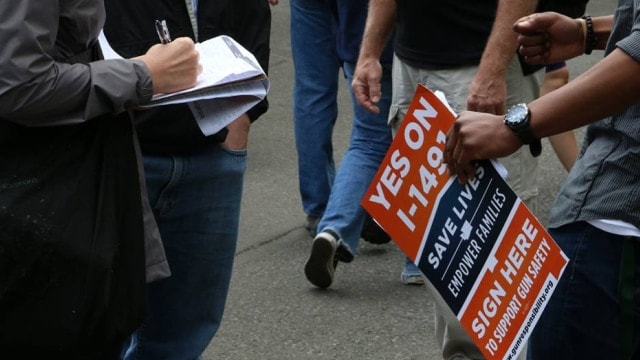 The Washington Secretary of State’s office is advising a gun control ballot initiative is likely to be in front of voters this fall. (Photo: Alliance for Gun Responsibility)

Gun control advocates last week turned in what they contend are enough signatures to add a voter referendum on Washington state’s proposed Extreme Risk Protection Order to the ballot this November.

Initiative 1491, some 21-pages in length, would establish a process to allow families and law enforcement to ask the courts to issue a temporary restriction on an individual’s gun rights.

According to a post to social media by the Washington Secretary of State’s office on Friday, the group has turned in some 335,000 signatures and is “likely to make (the) ballot.”

The Alliance for Gun Responsibility, who led an expanded background check initiative to voter approval two years ago, which has met with legal challenges and outright non-compliance, say their latest push is likely to be successful.

“We’ve done this before. We made history in Washington when we passed universal background checks in 2014, so we know what we’re doing, and this year we’ll do it again because the people of Washington are with us,” said an AGR representative July 7 as the group was turning in signatures.

A similar proposal was adopted in California after a disturbed man attacked the campus of the University of California Santa Barbara in Isla Vista. Prior to that incident, parents of the suspect tried unsuccessfully to get authorities to take away his weapons.

Gun rights supporters are urging “no” on I-1491, which they contend is bought and paid for by out of state interests.

“When you buy the signatures with money from Bloomberg and his cadre of billionaires you can get anything on the ballot,” Second Amendment Foundation Executive Director Alan Gottlieb told Guns.com. “That includes violations of the Second Amendment and due process rights.”

Some 246,372 valid signatures are needed to make the ballot and the Secretary of State’s Elections Division recommends that initiative sponsors submit at least 325,000 signatures to account for duplicate or invalid signatures. The average error rate is 18 percent. However, Secretary Kim Wyman ‘s office stated that “if enough signatures are submitted, the measure will undergo a 3 percent random sample check instead of a review of all submitted signatures.”