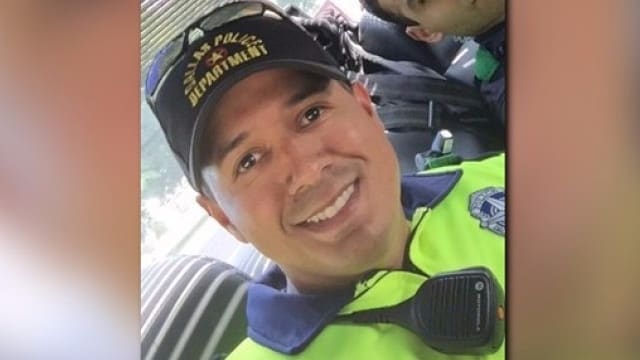 Among the casualties in the ambush that left five Texas law enforcement officers dead last week was Officer Patricio E. Zamarripa, a patriot and Navy Reservist.

A Master-at-Arms in the Navy with three tours in Iraq under his belt, Zamarripa had served with the Dallas Police for five years before his death Thursday.

“We mourn the loss of Petty Officer Zamarripa and will never forget his example of service to both his country and his community,” said Secretary of the Navy Ray Maybus in a statement. “Our thoughts are with all the families affected by this tragic attack and we are truly thankful to the first responders who risked their lives to prevent further loss of life.”

Zamarripa was assigned to Navy Cargo Handling Battalion 13, based in Gulfport, Mississippi at the time of his death. The unit is a Navy Expeditionary Logistics Support Group (NAVELSG) reserve battalion that supports operations ranging from supplying Marines in the Middle East, to Seebees in Antarctica.

Vice Admiral Robin Braun, chief of Navy Reserve, said of the fallen officer Friday, “The horrific loss of life that occurred last night in Dallas has shocked us all and serves as a reminder of the dangers that our first responders and shipmates like MA2 Patricio Zamarripa face each and every day. The Navy family and, indeed, all of America grieve at the senseless loss of MA2 Zamarripa and his fellow police officers. Together they faithfully and honorably served their nation and community and through their devotion to duty will forever stand as a shining example and source of inspiration to all who were fortunate enough to have known them. They and their families will remain in our thoughts and prayers.”

He is survived by his wife, 2-year-old daughter, and stepson.

On Independence Day, Zamarripa posted, “Happy Birthday to the greatest country on the face of this planet. My beloved America!” in one of his last messages.

Happy Birthday to the greatest country on the face of this planet. My beloved America!