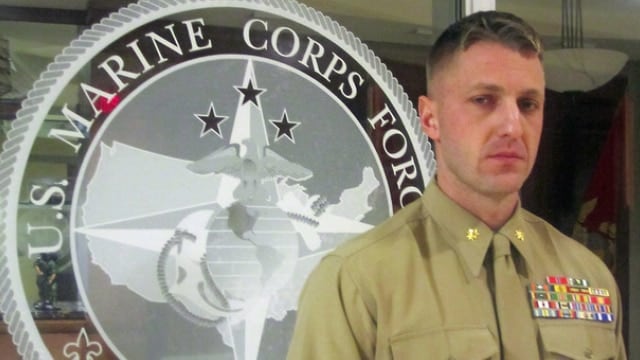 A highly-decorated Marine officer pending separation from the military for using his private email to send a warning to fellow Marines now wants the same consideration given to Hillary Clinton.

Maj. Jason Brezler, a Marine Corps Reservist, who has served four tours in Iraq and Afghanistan and has some 16 years in uniform  came under fire for mishandling classified information in 2012.

The situation of Brezler’s case– now the subject of a federal lawsuit with the Marine as a plantiff– was that he replied to an email sent to him by fellow Marines in Afghanistan concerning an Afghani police official, Sarwar Jan, to which Brezler attached a classified file warning that Jan may have had ties to the Taliban.

Jan has been described by Western media as, “the most crooked cop in Afghanistan” and shortly after Brezler’s email an aide of Jan’s conducted a “blue-on-green” attack that left several Marines dead.

Attending a graduate course in Oklahoma at the time, Brezler used an unsecured email account– Yahoo– which triggered a probe by the Naval Criminal Investigative Service who in turn found 100 classified documents on Brezler’s personal hard drive and thumb drive.

Since then, Brezler, whose “day job” is as a New York City Firefighter, has not been hit with criminal charges but his case is pending.

Now, with first FBI Director James B. Comey and then U.S. Attorney Gen. Loretta Lynch ruling out charges against former Secretary of State Hillary Clinton for keeping tens of thousands of official emails on a private server, Brezler’s attorney is crying foul.

“If that is so, then the current commander-in-chief should apply the same standard to Maj. Brezler and any service member under his command who have been found unfit to serve for far, far less alleged misconduct,” Bowe told the Marine Corps Times.