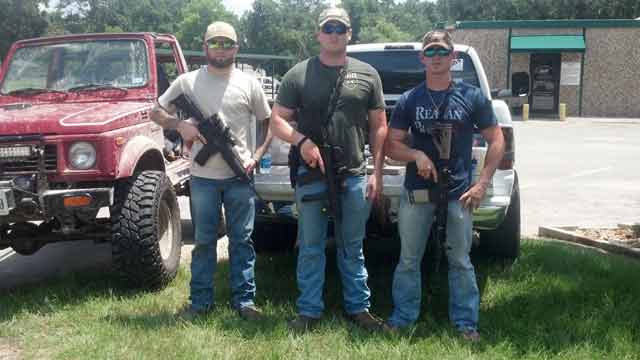 The three men said they simply wanted to let their law enforcement officers know that they were not alone. (Photo: Montgomery County Police Reporter)

A group of men stood outside of two Texas police departments Saturday morning in an effort to show their support for law enforcement.

Around 9 a.m., James Evans, Roger Tarrant and Paul Wilson showed up at the Patton Village Police Department, located about 40 miles outside of Houston. They parked their vehicles in front of the police department, and stood outside, rifles in hand. Evans told the Montgomery County Police Reporter that they just simply wanted local law enforcement to know that the community stood behind them and they are not alone.

“I am tired of seeing officers slain for doing their job,” Evans said.

The trio was met with much support, with passersby honking their horns as a sign of approval and others stopping to snap photos. Evans said after a short time of them being there, bottled water and snacks were being sent their way, compliments of local businesses and other residents in the community.

“We had to put some of the food on the hood of our truck just so people would know that we were good,” Evans joked.

After spending a couple of hours in Patton Village, the trio moved on to the Splendora Police Department, which shares a parking lot with City Hall. Apparently, some concerned citizens contacted authorities after seeing the men outside of the police department, and the inquiries prompted officials to address the situation through social media.

The Splendora Police Department publicly acknowledged the men and what they were doing, and assured residents that the men posed no threat, were not breaking any laws and were cooperative and understanding when approached by officers.

“They are showing support for local law enforcement agencies which is appreciated in this hard time the State of Texas and the country is going through,” the department said in a Facebook post.

Officials did, however, ask that individuals wishing to take photos of the men pull off the road in order to do so safely. The post concluded by thanking residents for their support.

The trio’s gesture came two days after 10 police officers were gunned down in Dallas, five of whom lost their lives. But it wasn’t the first time support has been shown in such a way either.

Last year when a gunman opened fire at a Navy recruiting office and reserve center in Chattanooga, Tennessee, killing five people, residents responded by standing guard outside of recruitment centers across the country. The show of support and act of protection lasted a few days, until one of the armed citizens standing outside of a U.S. Army recruiting center in Lancaster, Ohio, accidentally fired a round from his AR-15. No one was injured, but the armed citizens were promptly asked to leave.