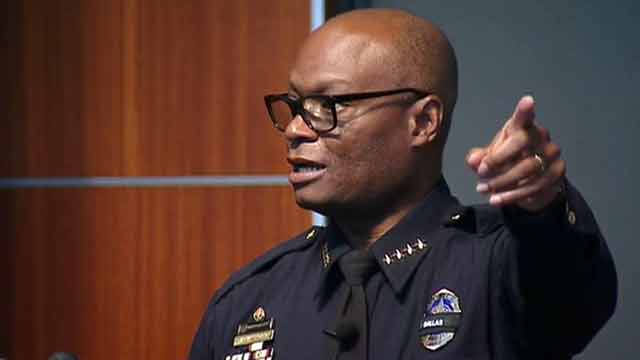 Get out there and be a part of the solution was the sentiment spoke by Dallas Police Chief David Brown. (Photo: Fox)

As protests over recent police shootings continued across the country, Dallas Police Chief David Brown encouraged protesters to not just remain peaceful, but become part of the solution by joining the force.

“We’re hiring,” Brown said in a press conference Monday. “Get off that protest line and put an application in. And we’ll put you in your neighborhood, and we’ll help you resolve some of the problems you’re protesting about.”

Brown shared a portion of his own story during the press conference, noting that he joined the force in 1983 after watching his own friends become consumed by the crack cocaine epidemic.

“It broke my heart and it changed what I wanted to do,” Brown said.

After he was hired, Brown climbed his way from patrol to SWAT, then internal affairs. In 2005, Brown became assistant chief of police and assistant city manager in 2007. Then, in 2010, Brown became the Dallas Chief of Police.

“They took an inner city kid like me with flaws and made me their police chief,” Brown said. “That’s an extraordinary city and they have supported me through very difficult challenges. You don’t see that everywhere.”

But Brown also noted he believes part of the current problem with police relations lies in the workload handed to law enforcement. On a daily basis, officers are faced with anything from mental health to drug addiction and education trouble to roaming dogs. Brown said officers are often overworked and underpaid, with a slew of problems consistently thrust on them.

“That’s too much to ask,” Brown said. “Policing was never meant to solve all those problems. I just ask other areas of our democracy, along with the free press, to help us and not put the burden all on law enforcement to resolve.”

Brown said tensions still remain high just days after a dozen of his officers were shot, five fatally, in an ambush in the midst of a protest in downtown Dallas over the weekend.

“There is a heightened sense of awareness over threats we’ve seen all around the country,” Brown said. “We’re all on edge, we are, and we’re being very careful.”

According to Brown, he and his family have received multiple death threats following the weekend rampage.