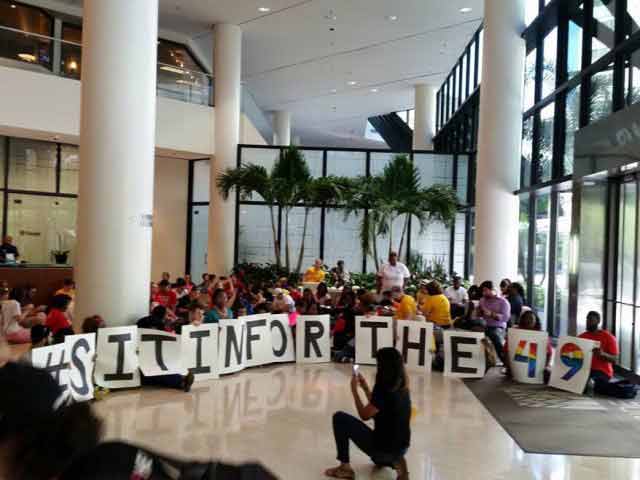 A slew of people supporting gun control measures planned a 49-hour sit-in at U.S. Sen. Marco Rubio’s Orlando office Monday, but when it came time for the building to close, several demonstrators refused to leave and were subsequently taken to jail.

Demonstrators urged Rubio to support greater gun control measures, with the 49 hours representative of the 49 people killed in the Orlando nightclub shooting last month. The sit-in came the week after Rubio was once again endorsed by the National Rifle Association amidst his re-election campaign.

In a statement, demonstrators said Rubio “continues to terrorize Orlando’s LGBTQ communities of color by adhering to a platform of so-called ‘conservative values’ which discriminates, dehumanizes and denies access to the American dream.”

After spending the day outside of Rubio’s office, officers on site issued a warning to demonstrators, clearly stating that the building would close to the general public at 7:00 p.m. and any demonstrators refusing to leave at that point would be subject to arrest.

“OPD has no issues with peaceful protests. But building is private property & owners want protesters removed. We hope all remains peaceful,” the department said.

About 35 minutes later, the department updated their Twitter feed and confirmed that 10 people were arrested after refusing to leave. The department also recognized and said they were “grateful to peaceful protesters who understand we have a job to do.”

These activists are staying. @WESH pic.twitter.com/EbvbW1RQrj

Activists who agreed to leave are outside singing… #SitInForThe49 @WESH pic.twitter.com/4ga42AR42o