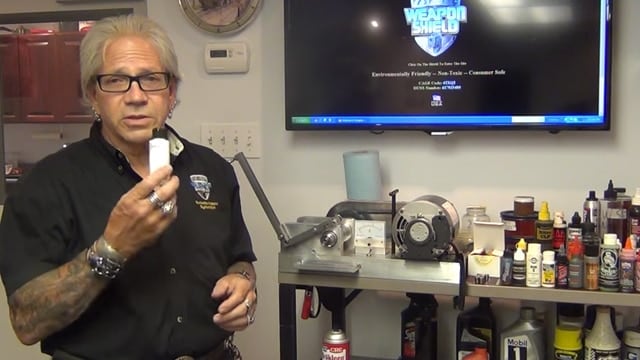 George Fennell, owner of the brand Weapon Shield, saying FireClean is the equivalent to “Wesson oil” in a video published June 10, 2015. (Photo: Weaponshield/YouTube)

A federal judge denied a motion to dismiss FireClean’s defamation case against the man accused of originating the rumor that the gun lube is Crisco cooking oil.

After a hearing July 1, the judge issued the order denying the dismissal as well as a separate motion to transfer the case to another court.

According to court documents, George Fennell’s defense argued that his statements calling FireClean various brands of cooking oil — like Crisco and Pam — were taken out of context.

Fennell submitted the requests in mid-May along with a request to quash the charges, but the latter was quickly tossed out by the judge.

FireClean, owned by brother David and Edward Sugg, named Fennell and his company Steel Shield Technologies as defendants in the lawsuit in March for an unspecified sum in damages.

Both parties are scheduled for a pre-trial conference Aug. 3 and to complete discovery by Nov. 11.

The case runs concurrently with another FireClean defamation case in which defendants are accused of perpetuating the characterization that FireClean’s chemical composition is the equivalent to cooking oil. However, defendants’ arguments have a better legal footing.

Last month, a judge sided with bloggers Andrew Tuohy and Everett Baker to deny discovery requests made by FireClean. Their attorneys will present arguments for dismissal on July 13.

Both bloggers introduced conclusions based on separate scientific experiments aimed at determining FireCleans chemical makeup. Their findings suggested it was a type of vegetable oil.