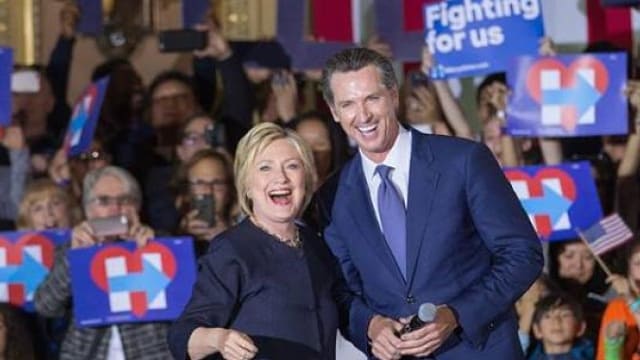 Backed by the California Democratic Party and wealthy donors, Lt. Gov. Gavin Newsom has paid professional signature gatherers a small fortune to get his gun control initiative in front of voters.

Newsom, who is currently running to replace Gov. Jerry Brown in office, will place a five-point list of gun control measures in front of voters in the coming general election.

Labeled as Prop. 63, Newsom’s “Safety For All” referendum will end grandfathering of magazines capable of holding more than 10 rounds, require relinquishment of weapons by those prohibited by the state from legal possession and mandatory reporting of lost or stolen guns. In addition, it would require background checks prior to all ammunition sales – a first for any state.

According to figures maintained by California Secretary of State Alex Padilla as of July 11, 2016, Newsom’s campaign has raised no less than $3,552,382.

When compared to the other 16 ballot propositions before voters, as noted by watchdog group Maplight.org, the gun measure has dwarfed the war chests of a number of other campaigns and falls about in the middle of the pack with initiatives concerning the death penalty, single-use plastic bags and adult films trailing behind while those on state prescription drug purchases, hospital fees and cigarette taxes garnering much more money.

Of Newsom’s millions, analysis by Guns.com shows no less than $321,000 in non-monetary donations from the state Democratic Party. Other non-monetary donations came from the Newsom for Governor campaign, which he actively requests cash through his social media accounts, interspersed with posts stumping for his ballot initiative.

Where has the money gone? The largest single outlay is no less than $1.3 million given to PCI Consultants, a nationwide petition management firm based in Los Angeles. PCI’s past clients helped push expanded background checks on gun sales in Washington state and anti-hunting agendas in Maine. Lesser amounts have been spent on ad and event production and setting up offices.

The Firearms Policy Coalition’s Second Amendment Defense Committee has garnered $120,924 from 566 small private donations with the largest being $7,000.

The Coalition for Civil Liberties has raised a modest $168,815 with gun rights groups the National Rifle Association, California Rifle and Pistol Association, and Gun Owners of California providing the bulk of that.

Coalition for Civil Liberties spokesman David Matza told Guns.com that the group is punching above their weight class in their fight against the much better-funded state executive.

“Gavin Newsom has been able to raise millions of dollars in the battle to take away Second Amendment rights. The Coalition for Civil Liberties has nearly reached the same number of people. However, the purchasing power of special interest’s tilts in Newsom’s favor,” said Matza.

“While Newsom has been bought and paid for by Hollywood and political elites, the Coalition continues to grow with ample support from law enforcement and local leaders throughout the State,” continued Matza. “The Coalition is ready to continue this fight against Gavin and will not let him and his cronies take away our civil right of self-protection.”

Combs had ominous words for those who would write off California’s ever-increasing gun laws as a lost cause.

“If you think that Governor Brown is bad, just wait until you see the crazy gun control bills that a Governor Newsom would sign. And then he’ll fly around the country to push his agenda in other states,” he explained. “Gun owners across America need to support their brothers and sisters in California. If Mike Bloomberg and Gavin Newsom are allowed to buy their way to victory here, these gun control Trojan horse laws will be heading to dozens of other states over the next few elections.”