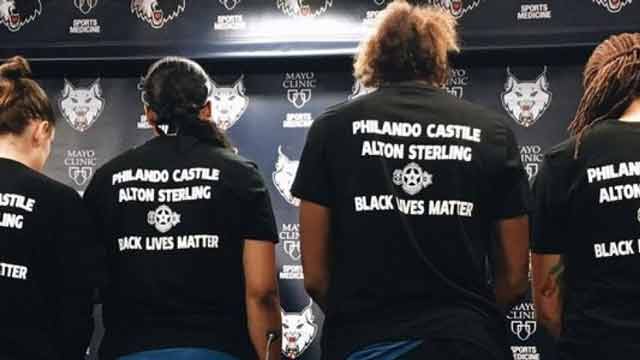 When members of the Lynx WNBA team walked into the Target Center arena in Minneapolis Saturday night wearing “Black Lives Matter” T-shirts, four off-duty officers who were moonlighting as security guards promptly walked out, refusing to offer their services.

“Change Starts with Us — Justice & Accountability” was printed in white on the front of the black T-shirts. On the back read Philando Castile, Alton Sterling and “Black Lives Matter.” The back also displayed an image of a Dallas Police badge.

Lt. Bob Kroll, president of the Minneapolis Police Federation, said four of the officers left after seeing the shirts, and Kroll said he commends them for their actions. He said, “Rushing to judgment before the facts are in is unwarranted and reckless,” referring to last week’s shooting deaths of Castile and Sterling.

Kroll also confirmed that as independent contractors, the officers had the right to start or stop the gig whenever they wanted.

Lynx spokeswoman Ashley Carlson confirmed the players wouldn’t be wearing the T-shirts when they go up against the Stars in San Antonio. But Kroll warned they may have trouble finding any officers to work security in the future.