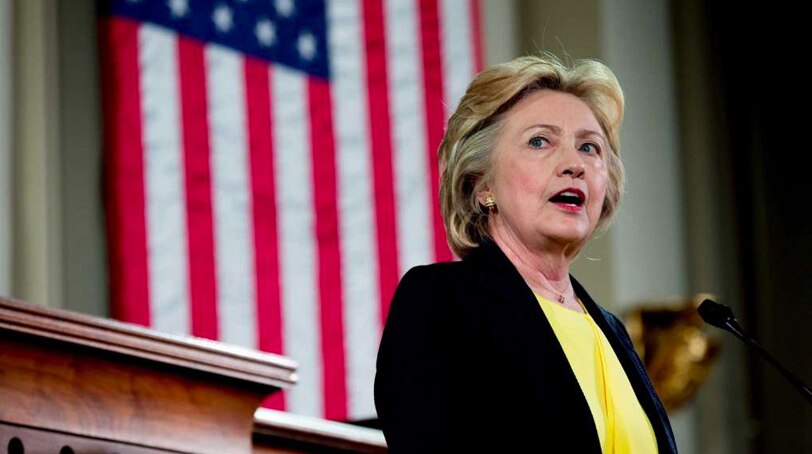 Clinton’s remarks came after two fatal police shootings of black men in Louisiana and Minnesota and an ambush killing of five officers in Dallas last week.

The former secretary of state delivered her address in the same hallowed building  once occupied by President Abraham Lincoln 158 years ago, when it served as the state capitol during his acceptance of the Republican Party’s nomination of him for Senate. Lincoln lost that race, but was ultimately elected president three years later.

Clinton invoked Lincoln’s “A House Divided” speech, which deliberated on the issue of slavery and how it was tearing the country apart.

“The challenges we face today do not approach those of Lincoln’s time, not even close, and we should be very about that, but recent events have left people across America asking hard questions about whether we are still a house divided,” Clinton said. “Despite our best efforts and highest hopes, America’s long struggle with race is far from finished.”

Clinton then mentioned last week’s shootings and denounced the violence wrought on the black community and on police.

“There is too much violence and hate in our country, too little trust and common ground,” Clinton said.

She said despite Amerca’s wealth, we have too much economic inequality.

“So too we must fight inequality and create opportunity in our time. Not just for some Americans, but for all,” Clinton said.

The sentiment resembled that of her former rival, Vermont Sen. Bernie Sanders, who endorsed Clinton Tuesday after a hard-fought campaign and presumptive loss in the race for party delegates and superdelegates, whose support carries more weight within the primary contest.

“She will be the Democratic nominee for president, and I intend to do everything I can to make certain she will be the next president of the United States,” Sanders said during a rally in the battleground state of New Hampshire, the Washington Post reported.

Speaking of the deadly shootings last week and of the less publicized killings of Latinos, Clinton said to make sure that violence doesn’t happen again, the country needs to take “a hard look at our laws and our attitudes.”

“It means embracing policies that promote justice for all people and standing firm against any attempt to roll back the clock on the rights and opportunities that so many sacrificed so much to secure,” Clinton said.

All of that starts with listening to each other, Clinton said, adding, “And yes we do need to listen to those who say black lives matter.”

Clinton spoke of President Barack Obama, who delivered remarks Tuesday at the memorial of one of the five Dallas police officers killed by a sniper while protecting a Black Lives Matter protest last week. It was the eleventh time Obama has visited a city and spoken about gun violence in the aftermath of a deadly shooting, Clinton said.

“The wrong people keep getting their hands on guns and not just any guns – military weapons like the kind that the Dallas killer had, which allowed him to outgun the police,” Clinton said. “And the vast majority of gun owners agree: We have to come together around common sense steps to prevent gun violence. If we’re looking for common ground, this is common ground and I hope that we will … come to agreement about that.”

Clinton said the shootings and income inequality are taking place against a “broader backdrop of fear and anxiety” before attacking Donald Trump, the GOP’s presumed pick to run against her in the general election. Clinton criticized Trump’s proposed policies and comments on immigration, women, his lack of knowledge of the Constitution and also his take on last week’s shootings.

“Trump’s campaign is built on mistrust and stoked on pitting American against American. It’s there in everything he says and everything he promises to do as president,” Clinton said. “This man is the nominee of the party of Lincoln. We are watching it become the party of Trump. And that is not just a huge loss for our Democracy, it is a threat to it.”

Clinton talked about trump supporters, who are looking for they place in a changing world, “No matter who they vote for.”

“The country is stronger when its citizens work together,” Clinton said, a throwback to Lincoln’s famed speech to a politically polarized nation.