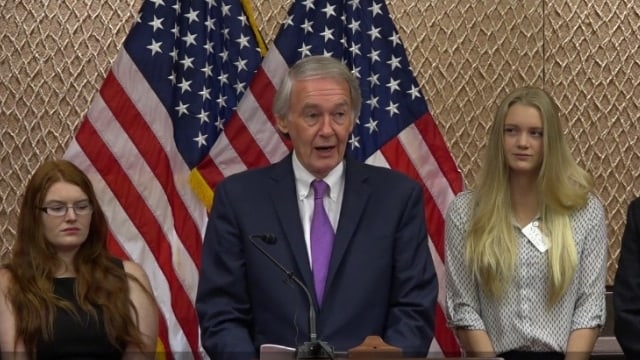 Bill sponsor U.S. Sen. Ed Markey, D-Mass., along with the children of slain firearms instructor Charles Vacca spoke of the need to prohibit many classes of firearms from youth under 16. (Photo: We Have a Voice)

Lawmakers on Tuesday introduced new legislation to Congress that would bar use of all select-fire and many semi-automatic firearms to youth under 16.

The Help End Assault Rifle Tragedies Act, proposed by U.S. Sen. Ed Markey, D-Mass., and Rep. Ruben Gallego, D-Ariz., would enact a blanket prohibition on select-fire or full auto guns from being used by those 15 and younger while at the same time limit many semi-auto options in conjunction with expanding the federal government’s definition of what constitutes an “assault weapon.”

Markey argues the law is needed following the death of a firearms instructor in Arizona in 2014 at the hands of a 9-year-old who lost control of an Uzi and a similar incident in Westboro, Massachusetts, when an 8-year-old accidentally killed himself in 2008.

“The small hands of children and big power of machine guns are a deadly combination,” said Markey in a statement emailed to Guns.com. “The HEART Act is simple and straightforward: It prohibits the transfer of a machine gun or semiautomatic weapon to anyone under the age of 16. Not at a gun range, not at a gun show, not while hunting, not anywhere, anytime. Assault weapons are weapons of war and should not be allowed in the hands of children.”

The language of the legislation introduced in both chambers of Congress would prohibit the loan or transfer of a machine gun or semi-auto “assault weapon” to anyone under age 16, including even temporary loans at a shooting range or in hunting. To further tighten what is considered an assault weapon under federal law, the bill would mandate that any semi-automatic rifle that can accept a detachable magazine and has either a forward grip, folding or otherwise moving buttstock, grenade launcher attachment, barrel shroud or threaded barrel would meet that standard.

In effect, making such innocuous guns as a .22LR caliber Savage 64 FV-SR rifle an assault weapon by definition.

Likewise, threaded barrels or barrel shrouds on semi-automatic handguns with a detachable magazine would be prohibited from loaning to a youth for target practice or hunting. This could include many popular models such as the Smith and Wesson M&P22.

Programs such as one in use by the Boy Scouts in Maine that use suppressors to help with hearing protection could be endangered under such a mandate.

The legislation has the support of the children of Charles Vacca, the instructor killed in Arizona in 2014, and they have launched a petition site to publicize the bill – a cause they have championed since last year. Soon after their father’s death, they penned a letter filled with empathy and forgiveness to the unidentified girl who accidentally shot their dad.

“Kids at school ask me how my Dad died all the time. I tell them he was killed by a 9-year-old learning to fire an Uzi,” says Vacca’s son Tyler. “Then I explain to them there is no age requirement to be able to fire a machine gun.”

Gun rights groups, especially those who back National Firearms Act-compliant items such as select-fire guns and suppressors, argue the bill is both overreaching and unneeded.

“The Markey/Gallego gun ban proposal is nothing short of an outright attack on the right of parents to decide when and how to introduce their children to the American heritage of outdoor sports,” said Todd Rathner, executive director of the Arizona-based NFA Freedom Alliance in a statement emailed to Guns.com. “Their craven assault on parental authority and Second Amendment rights would eliminate the ability for a parent to choose the manner and type of gun safety and self-defense training they believe is best for their family.”

Rathner took particular exception to the sweeping language of the measure that would target many guns in current use for youth shooting sports.

“As it is drafted, this bill would prohibit a parent from allowing their child to hunt or target shoot with millions of the most common, popular, and safe firearms in existence, including the ubiquitous Ruger 10/22 .22 caliber rifle – the most popular rimfire rifle in America – if it has common features such as a threaded barrel, folding stock, or a pistol grip,” Rathner said. “If a parent hands a gun on this massive ‘ban list’ to their child, the parent could go to federal prison.”

Rathner argues that the two cases pointed to by Markey and Gallego to promote their bill could have been avoided with better training and by following basic gun safety rules.

State lawmakers in Arizona and Louisiana have backed more narrowly-defined proposals without success.