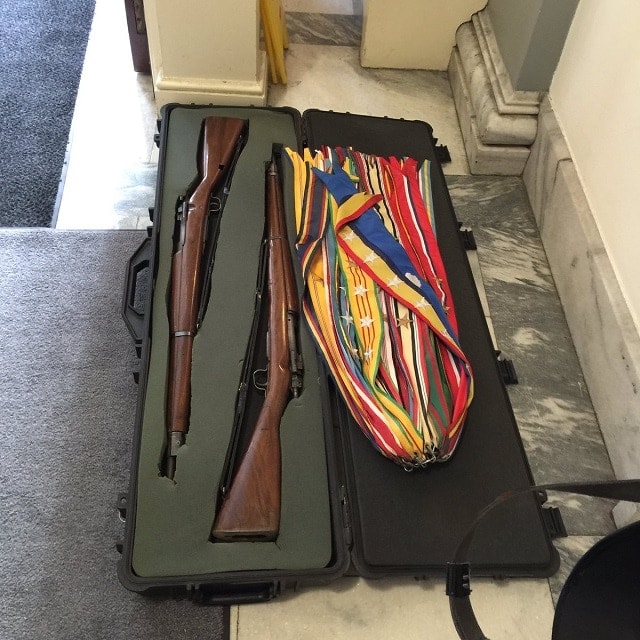 Marines with inert drill rifles had to standby at the Capitol while police cleared them. (Photo: Kristina Wong/The Hill)

The U.S. Capitol Police delayed a uniformed Marine color guard detachment at a security checkpoint for 20 minutes while they made sure the unit’s ceremonial 1903s were legit.

As first reported by Kristina Wong of The Hill, Capitol Police stopped a four-strong Marine detail in their dress blues with two cased M1903 Springfield drill rifles at the south entrance of the Cannon Building. Three of the Marines were able to proceed while a fourth remained with the ceremonial weapons and an array of hard-earned Battle Streamers until they were cleared to proceed to a scheduled event on the reservation.

Wong noted that, “At one point, one of the Marines was on his cellphone outside of the building and could be overheard trying to explain the situation to someone.”

Eva Malecki, a spokeswoman for the Capitol Police, told the Marine Corps Times, “it is a long-standing standard operating procedure for the U.S. Capitol Police to inspect all weapons,” and that color guards’ weapons are inspected at each event to ensure they are inert.

Ironically, Marines garrisoned in Washington D.C. helped defend the capital during the terrible defeat of the Battle of Bladensburg in 1814 while the Capitol Police wasn’t established until 1828, but hey, who keeps track of such things.