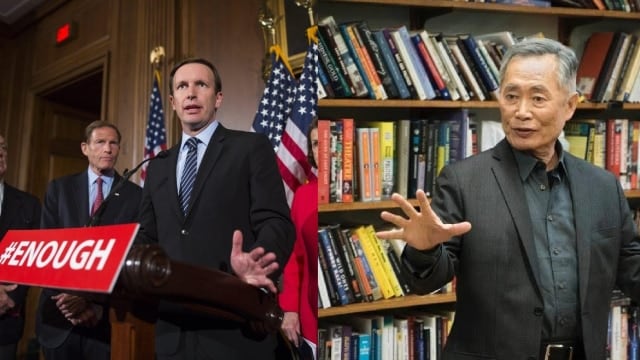 The Orlando terror attack has led to the birth of at least two new gun control organizations, each helmed by outspoken advocates. (Photo: Composite)

In recent days, actor and activist George Takei has founded One Pulse for America while Connecticut Democrat U.S. Sen. Chris Murphy kicked off the Fund to End Gun Violence.

Star Trek icon Takei, an outspoken member of the LGBT community, began his group in response to the terror attack at the Pulse gay bar in Orlando on June 12, from which the organization borrows its name.

“At One Pulse for America, we help other excellent organizations amplify their message,” notes “Uncle George” Takei on the group’s sign-up page. “We need sensible gun laws and an end to the extremism and hatred, so that mass shootings of innocents becomes a thing of our nation’s past.”

Centered on a closed Facebook group, One Pulse has some 48,833 members and self-identifies as a community that is ready to fight for gun control.

“This is a page for True Believers and Doers,” reads the page. “The folks who don’t need convincing that we need tougher gun laws. The folks who have been dying to turn up the volume and just needed to find the right muse.”

Though Takei does not have the same deep pockets that some other celebrity gun control backers do, the actor has a huge web footprint and enjoys nearly 10 million followers on social media. One Pulse is actively searching for new members using Takei as a hook.

Besides Uncle George, the group has already drafted a heavy hitter in the gun control activism community– Ladd Everitt. The decade-long head of communication for the Coalition to Stop Gun Violence notes on his social media account that he has left that group to become director at One Pulse.

Connecticut lawmaker Chris Murphy is the junior senator from his state in Congress but has long championed gun control measures. It was Murphy’s post-Orlando 14-hour filibuster in that body which led to a failed vote on four measures to expand background checks, strengthen the background check system and make it harder for those associated with terror watch lists to legally purchase firearms last month.

This week he announced his Fund to End Gun Violence, which will be geared to raise money and endorsements for pro-gun control lawmakers and candidates.

“By taking a stand and rallying the public behind us, Democrats in Congress forced Republican leaders in Congress to hold votes on and debate measures to combat gun violence,” said Murphy as reported by the New York Daily News. “But it’s still clear that the Republican Congress is still beholden to the gun lobby.”

Besides Murphy, the group has the support of Sens. Chuck Schumer, D-N.Y., and Cory Booker, D-N.J., as well as Reps. Katherine Clark, D-Mass., and Rep. Robin Kelly, D-Ill..

It is not immediately clear if Murphy’s group is distinct from the newly founded Pride Fund to End Gun Violence PAC for which paperwork was filed last month. Guns.com has asked for clarification from both Murphy’s office and the Pride Fund.

The following statement was sent to Guns.com by the Pride Fund:

While we commend the efforts of Senator Murphy and his coalition, Pride Fund to End Gun Violence (Pride Fund) is a separate and independent entity. Pride Fund is a registered political action committee dedicated to supporting candidates who champion both gun reform and LGBTQ safety and equality. In the wake of the Orlando massacre, we registered as a PAC on June 22nd to establish a direct political action effort to create change in Washington.

While we are separate and distinct, we look forward to working with all organizations, including the coalition and office of Senator Murphy, in supporting elected officials that will act to end the senseless gun violence that plagues our nation.