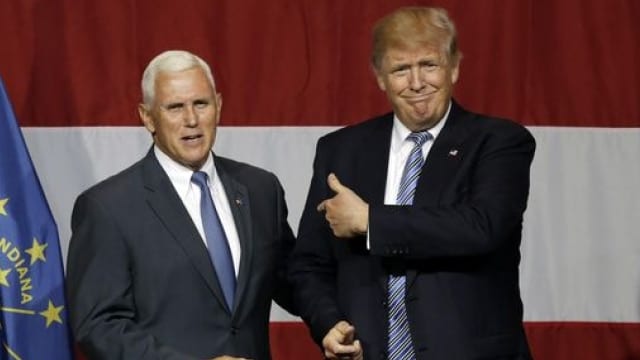 News that Pence is suspending his re-election bid in Indiana to become Donald Trump’s running mate Thursday brings a history of pro-Second Amendment initiatives to the campaign.

While Trump’s campaign advises no formal announcement will be made until Friday morning, Pence, who led the House Republican Conference while a lawmaker before entering the Governor’s mansion in Indianapolis in 2013, the IndyStar has confirmed Trump plans to announce Pence as his selection for vice president. The news was verified by the New York Times.

Rated “A” by the NRA, Pence has repeatedly spoken at the group’s Leadership Forum during their annual meeting which in 2014 was held in Indianapolis.

“I’m a card-carrying member of the NRA,” Pence noted early into his speech to the group in Louisville this year before attacking Hillary Clinton over Second Amendment issues.

“You cannot support Hillary Clinton for President of the United States and promise the right of the people to keep and bear arms will not be infringed,” said Pence. “It just doesn’t add up.”

In his dozen years in the House of Representatives, Pence towed the party line on gun reform measures and most importantly, in 2005, voted to pass the Protection of Lawful Commerce in Arms Act, a hotly debated law for Democrats this election year.

Following a domestic terror attack on Navy and Marine personnel in Chattanooga in 2015 that left four service members dead, a cascade of state governors authorized increased security for national guard members under their jurisdiction to include, in some cases, the carry of weapons.

Pence moved forward with a plan to allow Indiana Army and Air National Guard Members to carry personal concealed weapons provided they had a valid permit and received training, bringing in the NRA who provided free certified instructors though in doing so he drew criticism from gun control advocates.

This year Pence, who takes part in the shooting sports, signed legislation to establish rifle seasons for the Indiana deer hunters, despite push back from state conservation authorities as well as further NFA reforms.

The Hoosier Governor brings a solid pro-gun footing to the Trump ticket, which has been picked apart by those running against him as well as Second Amendment bloggers.

Trump himself provided easy ammunition for skeptics when he said in his book “The America We Deserve” that he supported an assault weapon ban and a 72-hour waiting period before buying a gun though he has made strong attempts to show he has become more conservative when it comes to gun politics in recent months, earning the official endorsement of the NRA in May.

Gun control advocates were quick to slam Trump’s choice for his record.

“Governor Pence is bought and paid for by the NRA and in lockstep with the gun lobby’s dangerous ‘guns for anyone, anywhere, anytime – no questions asked’ agenda,” said Shannon Watts, founder of Moms Demand Action, in a statement emailed to Guns.com. “He supports letting more people carry hidden, loaded guns in public and has consistently backed unprecedented immunity from liability for gun manufacturers.”

Calling Clinton the “gun safety champion,” Watts pointed to November saying, “With this pick for vice president it has become crystal clear: gun safety will be a defining and winning issue of the 2016 election.”

A Trump-Pence ticket could become official at the GOP Convention next week.