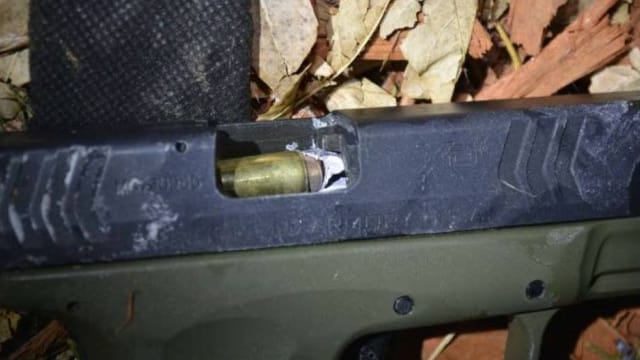 That’s one way to knock out a bad-guy’s gun. (Photo: 18th Judicial District Attorney’s Office via The Aurora Sentinel)

Prosecutors in Colorado cleared a sheriff’s deputy in an officer-involved shooting that included a shot right down the barrel of an attempted robber’s pistol.

Deputy Jose Marquez was cleared by Arapahoe County prosecutors Wednesday for his role in a shooting that took place in January. As reported by the Aurora Sentinel, Marquez was off-duty and visiting his girlfriend when he was shot in both the abdomen and shoulder during a gunfight with two robbery suspects in an apartment parking lot.

Marquez, who was in civilian clothes at the time, was confronted by the two armed men who opened fire first. Returning fire, the deputy injured Jhalil Meshesha who was later arrested.

Meshesha’s gun, a Springfield XD, was disabled during the exchange of fire by one of Marquez’s bullets after it remarkably traveled down the barrel from muzzle to chamber and jammed the action in what officials call a “one in a billion shot.”

Marquez is still recovering from his wounds and the second, unidentified suspect, is at large.