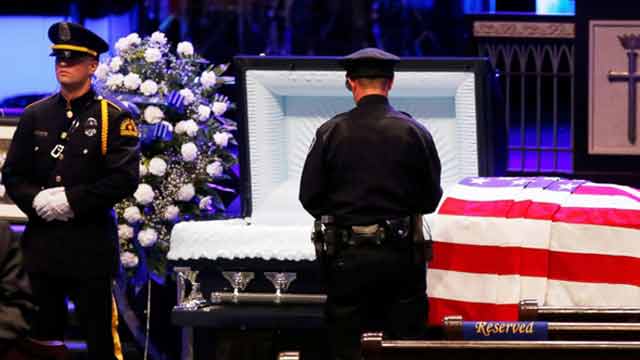 Three of the five officers killed in an ambush in Dallas last week were laid to rest Wednesday. (Photo: Carlo Allegri/Reuters)

“Law enforcement officers selflessly put their lives on the line every day to protect our communities, and in return they deserve our unparalleled support for the irreplaceable role they serve,” Sen. Cornyn said in a statement. “The Back the Blue Act sends a clear message that our criminal justice system simply will not tolerate those who viciously and deliberately target our law enforcement. As our country continues to grieve following last week’s tragedy in Dallas, we must come together in support of those who risk everything to keep us safe.”

Under the proposed legislation, attempting to or conspiring to kill a federal judge, federal law enforcement officer, or federally-funded public safety officer would be a federal offense. A conviction could result in a mandatory minimum 10-year sentence for attempted murder and a mandatory minimum 30-year sentence for murder, along with eligibility for the death penalty.

Additionally, the proposed legislation further expands self-defense and second amendment rights for law enforcement, allowing them to legally carry firearms into places which were previously prohibited.

Sen. Thom Tillis, R-N.C., who co-sponsored the bill along with Sen. Ted Cruz, R-Texas, pointed to last week’s tragedy in Dallas as an example of the dangers faced by law enforcement officers.

But the bill also calls for grant money for the purpose of building and strengthening relations between law enforcement officers and the communities in which they serve. Sen. Tillis called this a “critically important step” toward improvement.

Sen. Cornyn called law enforcement the glue that holds the country together.

“Without the safety and security that they provide, none of our other freedoms are really possible,” he said.