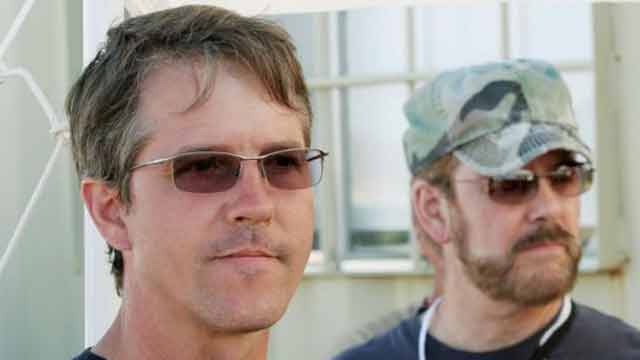 Chris Simcox, left, will spend the next 19 1/2 years behind bars. (Photo: Jeff Topping/Reuters)

The man who helped create a citizen-based border patrol group working out of Arizona was sentenced in a Maricopa County Superior Court Monday to more than 19 years in prison for the molestation of a 5-year-old girl.

Up until his arrest in June 2013, Christopher Allen Simcox, 55, maintained his innocence surrounding the accusations, which included the molestation of two children, who were 5- and 6-years-old at the time of the abuse. The abuse, which went on from April 2012 to May 2013, apparently happened during visitation with Simcox’s own daughters. Authorities say in addition to the sexual abuse, Simcox also showed the girls pornographic movies, which resulted in a felony count for providing obscene material to a minor.

Simcox originally faced a mandatory life sentence for three counts of engaging in sexual conduct with the 6-year-old girl, but Simcox, who acted as his own attorney, was acquitted of those charges. Simcox was convicted of the remaining charges last month, for which prosecutors originally sought a 36 1/2 year sentence, but instead got a little more than half of that.

“The defendant committed unconscionable acts against a young child, the emotional and psychological effects of which she’ll have to deal with her entire life,” County Attorney Bill Montgomery said in a statement.

“Today’s sentence won’t take back the harm he has done, but it removes the opportunity for him to prey on another child.”

Simcox helped form the Minuteman Civil Defense Corps in 2005. The militia group patrolled the United States-Mexico border in Arizona and would report illegal immigrants to law enforcement officials. The group stayed active for about five years, before dissipating in 2010. Sim also campaigned for U.S. Senate that same year, but failed.