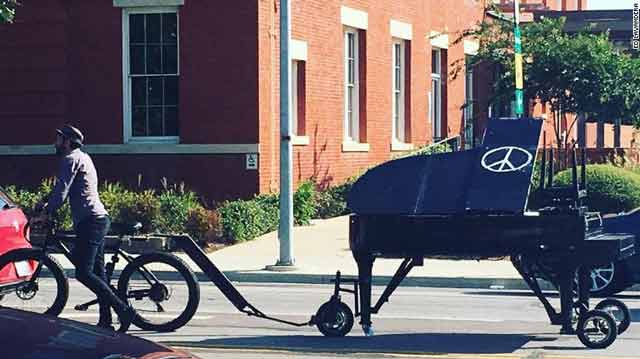 you may say I'm a dreamer, but I'm not the only one. saw him rolling in on a bike, pulling his piano when we were about to leave. He only played that song and left. when reporters tried to interview him, he shooed them off and left. amazing.

A man with a portable piano on wheels is aiming to promote peace one song at a time, and on Tuesday, he stopped by the Dallas Police Department to play a rendition of John Lennon’s “Imagine.”

The pianist, who was later identified as Davide Martello, apparently rolled up on his bicycle, his baby grand piano in tow, sat down without saying a word, then began to play. Crowds quickly gathered, with some people snapping photos and capturing video, but afterwards, Martello reportedly stood up, gathered his instrument and took off on his piano-pulling bike. According to at least one witness, Martello “shooed away” reporters looking for a story.

the colours of my pianokeys inspired me to come to Dallas today. I will play infront of the memorial to promote peace

Martello later agreed to talk with CNN and simply said he was traveling around the world with a mission to “promote peace through music.”

“During my travels, sometimes it’s happening that some violent situations are coming and I’m using my piano as a way to spread the peace,” Martello said.

In the past, Martello has played following attacks in Paris, as well as Istanbul and Kiev. He said he wants to eventually play in every capital in the world.