Attempted coup leaves over 200 dead and 2,000 arrested in Turkey 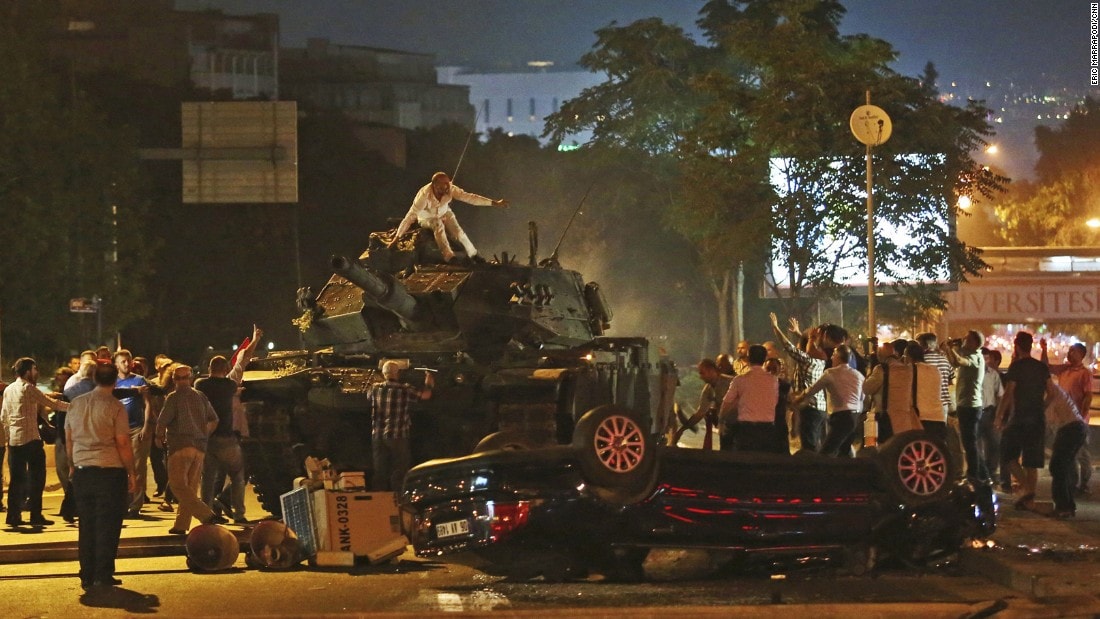 Factions of the Turkish military attempted a coup against the reigning government on Friday, but were ultimately unsuccessful resulting in over 200 deaths and 2,800 military personnel detained.

Chaos unfolded late Friday evening when military soldiers armed with tanks, cars and guns stormed Turkish streets, blocking off major bridges and the airport in Istanbul. As jets buzzed overhead, a statement from the military said that the control had been seized “to reinstall the constitutional order, democracy, human rights and freedoms, to ensure that the rule of law once again reigns in the country, for law and order to be reinstated.”

President Recep Tayyip Erdogan, tucked away on a coastal vacation, urged followers via FaceTime to rally against soldiers in support of the current government. Tens of thousands of Erdogan supporters responded, flooding the streets and confronting the revolting military personnel. Waving Turkish flags and chanting, some even went so far as to climb on tanks and use their personal cars to block the paths of military vehicles.

Gunfire and violence continued through the night, but as the sun came up on Saturday, Erdogan’s supporters had military personnel surrendering en masse as the president greeted crowds in Istanbul. He confirmed the coup had been squashed and that the democratically-held government prevailed.

Erdogan also warned that coup supporters would pay, “a heavy price for their treason to Turkey.”

Though details on exactly who orchestrated the attacks is still unconfirmed, Erdogan pointed to Fethullah Gulen, an exiled Muslim cleric living in Pennsylvania.

“Any country that stands behind him is no friend of Turkey, is engaged in a serious war with Turkey,” said Prime Minister Binali Yildirim.

Gulen denied involvement. “As someone who suffered under multiple coups during the past five decades, it is especially insulting to be accused of having any link to such an attempt,” he said in a statement disseminated by the Alliance for Shared Values.

U.S. Secretary of State John Kerry spoke Saturday evening with Turkish Foreign Minister Mevlut Cavusoglu. Though Kerry reiterated that the U.S. stands behind a democratically held government, he emphasized  restraint and due process during the investigation. Kerry also condemned any insinuations that the U.S. had any role in the failed coup.

As of Saturday, U.S.-backed military airstrikes were temporarily halted at Incirlik Air Base, located in the southern part of Turkey near the Syrian border. Pentagon officials said the U.S. is working to reopen Turkish air space and reinstate air operations soon.

“U.S. officials are working with the Turks to resume air operations there as soon as possible,” Pentagon Press Secretary Peter Cook said. “In the meantime, U.S. Central Command is adjusting flight operations in the counter-ISIL campaign to minimize any effects on the campaign. U.S. facilities at Incirlik are operating on internal power sources and a loss of commercial power to the base has not affected base operations.”