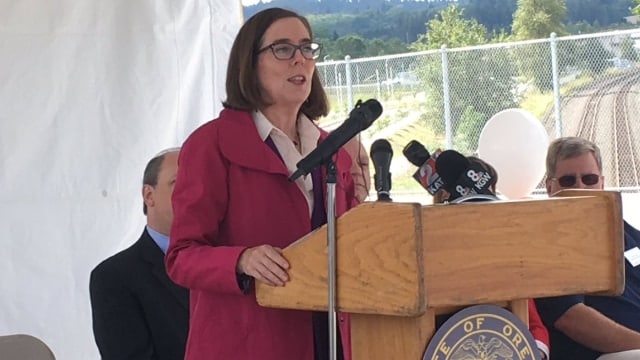 Brown, the former secretary of state, came to office without taking part in the traditional electoral process, succeeding Gov. John Kitzhaber upon his resignation following a corruption scandal last February. Since in the Governor’s seat she has been a very strong supporter of gun control, embracing a controversial Bloomberg-backed bill to expand background checks to virtually all gun transfers that she signed into law last year.

However, she announced last week she is just getting warmed up.

“Since I was sworn in as governor 17 months ago, more than 600 Oregonians have died from violence inflicted by a gun,” said Brown in her speech on the subject Friday. “Violence answers nothing, offers nothing, solves nothing. If we want to end violence, we must instill hope and create opportunity. I call on each of us, as Oregonians and as Americans, to join this call to end gun violence now.”

First, the Oregon State Police will be directed to retain firearms transactions data – now required for even private sales – for five years, establishing a defacto if temporary firearms registry. As part of the mandate, the agency will also use data from federal law enforcement agencies to trace all firearms recovered as part of criminal investigations.

Next, under Brown’s order, OSP will expand how it follows up on potential prohibited possessors to include launching criminal investigations and sharing data with other agencies and prosecutors. This is an expansion of a state police policy implemented by Kitzhaber’s administration in 2014 where in the event of a denial by the state’s Firearm Instant Check System, state troopers would be dispatched from patrol to the dealer’s location to investigate.

As the third part of her order, Brown directed the Oregon Health Authority to study firearms related deaths or crimes and their effect on public health, reporting to the Governor’s office should they need more mandates to do so. This comes in hand with an effort to expand how the state looks at gun-related domestic violence offenses and how those offenses can disqualify some from obtaining a concealed handgun license or a firearms transfer.

In addition to her executive orders, Brown will be working with state lawmakers through what is termed Oregonians United to End Gun Violence on legislation to close the “Charleston Loophole” allowing firearms transfers to proceed if a background check takes more than three days, close the “Boyfriend Loophole” by expanding domestic violence gun surrenders to include boyfriends and ban “extended capacity magazines” in the state.

Moving to national politics, Brown is vowing to work with Oregon’s congressional delegation to push for reinstituting the federal assault weapons ban and enact no fly/no buy legislation to prohibit gun transfers to those on secretive government watch lists.

Not all would agree with Brown’s assessment.

“One day after a truck was used to murder over 80 people in France, Kate Brown and other liberal hacks held an anti-gun press conference that had more cops than reporters,” the Oregon Firearms Federation, a state gun rights group, said in a statement.

“As always, surrounded by armed guards, Governor Brown called for a ban on standard capacity magazines, an end to the safeguard that allows Oregonians to transfer firearms when the Oregon State Police don’t do their jobs and an expansion of attacks on people who are accused of domestic violence but never actually charged or convicted of anything,” the gun group said.

The group is supporting a rally this weekend at the Capitol in Salem to protest Brown’s actions.

Conservative bloggers pointed out that the “more than 600 Oregonians” killed by firearms in Brown’s speech was a deceptive number, note that according to OHAs own statistics an average of about 56 gun homicides occurred in the state over the past five years. The leading demographic for firearms death in the state is among non-Hispanic White males, 65 and older, by suicide.

With Democrats in charge of both chambers of the state legislature, they do not need Republican help to pass a package pushed by Brown, though GOP lawmakers aren’t ready to roll over and play dead.

“Oregon House Republicans welcome a conversation about how to address violence in our communities, but it is absolutely critical that those conversations maintain the appropriate level of respect for Oregonians’ constitutional rights and the thousands upon thousands of gun owners in this state who responsibly exercise their Second Amendment rights and Article I, Section 27 rights every day,” said Republican Minority Leader Mike McLane in a statement. “Sadly, this element of the conversation is all too often an afterthought for politicians in Salem.”

I will work w/ our Leg. to close dangerous loopholes, keep guns away from dangerous people & hold wrongdoers accountable. #EndGunViolence