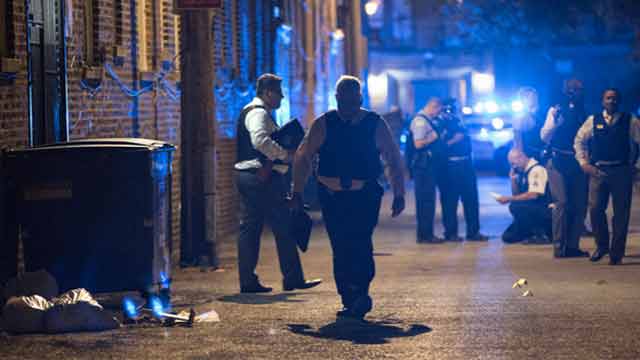 Authorities in Chicago are pleading for help in combatting the city’s violence after 59 people were shot over the weekend, seven fatally.

Just over seven months into the year, the city has already seen nearly 2,200 shootings, leaving 331 people dead, according to a database maintained by the Chicago Tribune. The city is once again on track for a record-breaking year of violence, with the number of shootings each month already far surpassing the same month of the previous year.

The recent rise in violence — which is always higher in the hotter, summer months — resulted in the Chicago Police Department’s creation of a new summer patrol unit. While authorities are consistently pouring more resources into the city, First Deputy Superintendent John Escalante said in a meeting Monday that even more needs to be done.

Escalante expressed frustration with the system and said there needs to be greater accountability for people who commit crimes. Escalante pointed to the example of Raygene Jackson, a 38-year-old man who was shot and killed early Sunday morning. Escalante said he did not intend to victimize Jackson any further, but noted his prior criminal history.

“In 1995 he was sentenced to 46 years in the Illinois Department of Corrections for a murder,” Escalante said. “In 1995. He was paroled last year. How and why he’s on the street, I don’t know.”

Escalante noted that had Jackson still been serving his sentence, he would not have been killed over the weekend.

Additionally, Escalante pointed to 20-year-old Carlos Harding, who was killed in a double shooting just before 8 p.m. Sunday. Escalante said Harding had already been arrested 61 times, with at least 20 convictions. Escalante said even though Harding’s convictions are mostly all low-level misdemeanors, it gave a glimpse into what they are up against.

Escalante said he feels like authorities put into place good strategies week after week, but until they get everyone else — including the courts, state legislators, and other community activists — to work with them, residents will continue to see the high crime rates.