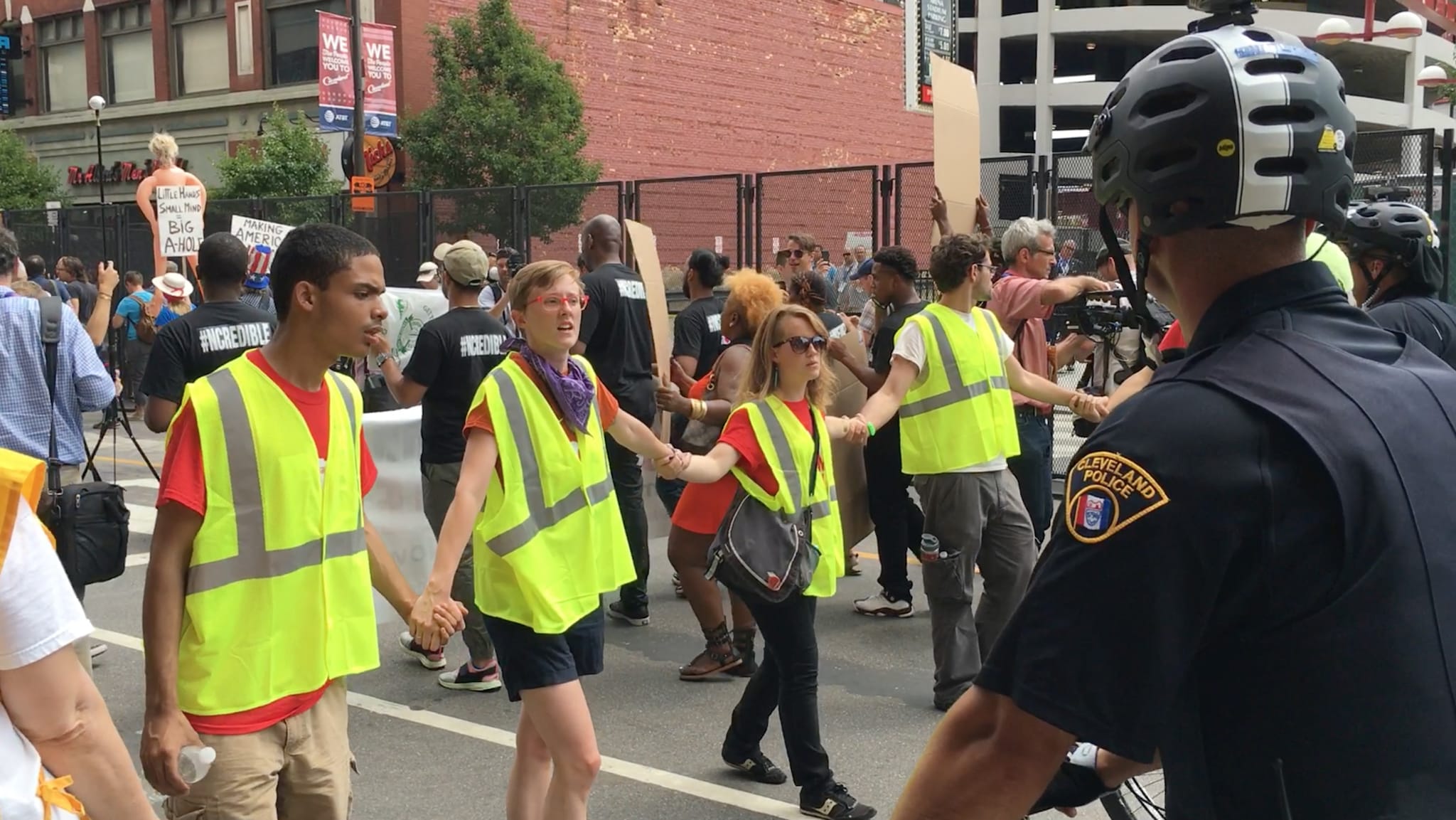 Some 50 Cleveland Police officers on Monday separated a handful of religious demonstrators from another, much larger group of anti-Trump protesters – the officers’ bikes lined tire to tire in front of them, forming a large circular blockade of metal frames, spokes and rubber.

The religious group came to the Greater Cleveland Veterans Memorial in the heart of downtown to pick a fight, at least verbally, and its vitriol was met in kind, with protesters shouting down their megaphone. The confrontation came after the protesters – a coalition made up several organizations, including Black Lives Matter – peacefully marched the streets of downtown Cleveland.

The police wall was backed by a greater law enforcement presence of about 25 Indiana State Police officers and close to 30 others from the Columbus Police Department.

Among the 100 or so police officers in the square, badges were peppered with black elastic bands of mourning. Three fellow officers were killed in Baton Rouge on Sunday, when many were still likely wearing the black from a deadly shooting of five officers in Dallas less than two weeks earlier.

When the blockade of officers thought the protesters had gotten too close, they effectively increased their perimeter.

“Move back,” one of them shouted, to which the bike-helmeted group of officers repeated in unison, “move back.” Each officer lifted their bike, took a step forward and slammed it to the ground, a loud crunch and rattle of metal chains and gears reverberating through the square.

“Move back,” another thunder clap and protesters again complied.

Wondering the square in bright yellow shirts, representatives from Amnesty International held watch, looking for any human rights violations committed by police against the protesters. Eric Ferrero, deputy executive director for strategic communications and digital initiatives, told Guns.com they saw none, and went further to say the officers did well to protect the rights of both groups at odds with one another.

So far, the demonstrations here have been peaceful, nothing like the media predictions of chaos and civil disorder, nor have they resembled those of the Democratic convention in 1968, during the peak of the Vietnam War.

Normally under 1,600 officers, Cleveland’s force was bolstered by an influx of support from some 21 states, who sent their delegate officers to help keep the peace during the GOP nominating event.

Also involved in that effort is the Secret Service, the Bureau of Alcohol, Tobacco, Firearms and Explosives, Homeland Security Investigations and the Transportation Security Administration, who were actively involved in securing the perimeter of the Quicken Loans Arena.

It’s been estimated that more than 5,000 officers have been deployed to handle the more than 11,000 protesters registered for scheduled events throughout the city this week.