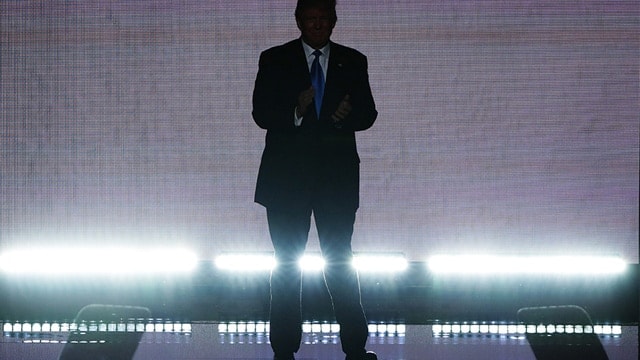 The Republican nominee, Donald Trump, teasing his appearance at the Republican National Convention in Cleveland on July 18, 2016.

Although Donald Trump is the subject of numerous allegations of corrupt business practices and has been attributed to countless embellishments, speakers at the convention sought to provide clarity on what kind of person he is while describing the current state of the U.S. as bleak. They also took potshots at President Obama, Hillary Clinton and “political correctness.”

“Donald Trump will have your back,” said Willie Robertson, the founder of the Duck Commander brand and TV show Duck Dynasty, in a speech describing Trump as anything but polarizing.

Robertson likened Trump’s relationship with America to his own relationship with his brothers who would defend him in any situation. He said Trump “will have your back” to those trying to grow a business, troops fighting overseas, cops at home, or the average American who feels forgotten.

“America is an easy place to get to. But – for you first-time voters – it’s important to know what it means to be an American,” said Charles in Charge actor Scott Baio.

He defined the term “American” to specifically mean not “getting free stuff” but rather “sacrificing, winning, losing, failing, succeeding. Sometimes doing things you don’t want to do, including the hard work in order to get where you want to be.”

Given the choice between Hillary Clinton or Trump, he said Clinton would “continue the same policies that are wrecking this country.”

“A woman who somehow feels entitled to the presidency that she is somehow owed it,” he said. “Or we can go for Donald Trump: A man doing this from the goodness of his heart and genuinely wants to help.”

After detailing their experiences in Benghazi, Libya, on Sept. 11, 2012, Mark Geist and John Tiegen took a shot at Clinton.

“Opportunities taken when we defied stand down orders and opportunities squandered when Hillary Clinton failed to protect her people on the ground. Had she done her job, we would not have had to compromise the annex,” Geist said.

“We did our part. Now do yours,” Tiegen said.

Texas Congressman Michael McCaul, chairmen of the Homeland Security Committee and member of Trump’s national security team, said the Obama Administration has “turned a blind eye to the danger” in the world.

Although he provided little to no detail how a Trump administration would resolve the issue of terrorism or other dangers, he said, “[Trump] will never bow down to our enemies. He will stand up to them.”

“And Donald will never allow terrorists to gain ground against America. He will shake the ground they walk on,” he added.

“A Trump Administration will take on this fight and send a clear message to the Islamist terrorists: you may have fired the first shot, but rest assured, America will fire the last,” he said.

Milwaukee Sheriff David Clarke, who regularly advocates conservative and pro-gun solutions, quickly set the tone of his speech: “I would like to make something very clear: blue lives matter.”

He characterized the need for law enforcement around the country to maintain social order.

“What we witnessed in Ferguson, in Baltimore, and in Baton Rouge was a collapse of social order. So many of the actions of the Occupy movement and Black Lives Matter transcend peaceful protest, and violates the code of conduct we rely on,” he said.

In order to repair the relationship between police and communities, he identified the need for authorities to acknowledge race as a heated issue and the need for transparency.

“Donald Trump understands that what can make our nation safe again is a recommitment to a system of justice in which no government official … can claim privilege above the law,” he said.

“A commander-in-chief who speaks of winning wars and not merely ending wars, calls the enemy by its name, and draws red lines carefully, but enforces them ruthlessly,” he said.

“And politicians who treat our common defense as the chief responsibility of our federal government, not just another government  program,” he added.

Former Army General and Director of Defense Intelligence Agency, Michael Flynn, harped on identifying those responsible for terrorism and the need for a leader who is clear on his agenda.

“I am certain we cannot win this war unless we are free to call our enemies by name — radical Islamists and failed tyrants,” he said.

Rudy Giuliani, former New York City mayor, stuck to the theme of the night and his speech addressed recent police shootings and the threat of terrorism. He referenced his experience rebuilding New York after the 9/11 terror attacks.

“What I did for New York City, Donald Trump will do for America,” he said.

“I know it can be done because I did it by changing New York City from ‘the crime capital of America’ to according to the FBI the safest large city in America,” he said.

“Donald Trump has said the first step in defeating our enemies is to identify them properly and see the connections between them,” he said.