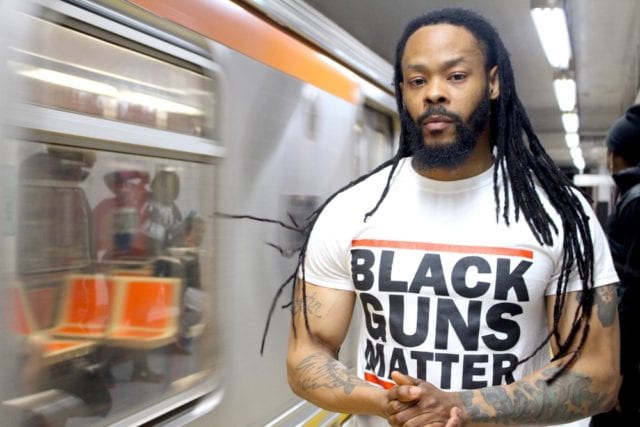 Not affiliated with the Black Lives Matter movement, 29-year-old community leader Maj Toure is a gun owner and a card-carrying member of the National Rifle Association and believes that the right to keep and bear arms is fundamental. And he is bringing that message, without any outside support, to the black community through outreach and free firearms training conducted by certified instructors.

“Charlton Heston said it – you basically got to pry this out of my cold, dead hand. I’m not going down that way because we are citizens, Americans,” Toure told Guns.com. “We are citizens. We have the right to exercise the Second Amendment and anyone that’s tryin’ to infringe on that is not only in violation of the Constitution but they’re also just a dick.”

Toure’s group, Black Guns Matter, came about after he saw a lot of misinformation in his neighborhood and similar urban areas nationwide on his travels as an artist and it disturbed him.

“You know, our information base started to look as if – to us, it looked like this was deliberate – like there is a deliberate attempt to make sure that people in the hood don’t have firearms,” Toure said. “And then doing a little bit of research we start to see that all gun control laws come from right after the emancipation of newly freed African people. So that being the case, instead of complaining about we just came up with something that could address that ignorance and it’s Black Guns Matter.”

Contrary to the typical talking points on gun crime and violence in inner city areas, which hold increased regulation on legal firearms sales and possession and denying the right to carry as a solution, Toure feels that it is a political bait and switch.

“Gun control is a sham. It’s not about gun control. It’s about people control,” he said. “It’s about trying to convince people that somehow the government is going to be responsible for your safety. That’s the equivalent of saying, ‘Hey, we have fires. Take all of the fire extinguishers out of your home because if there’s a fire, the firemen will just come.’ No, we’re not doing it.”

Toure goes on to quote Thomas Jefferson’s words on firearms, making the clear delineation that the Second Amendment is not about duck hunting or muskets, and is instead about resisting tyranny by a well-regulated militia formed of the people.

“That doesn’t mean control by, you know, state or federal government,” Toure said. “That means the people. I think what’s happening is a lot of people are getting away from what that understanding of things meant. So no, I don’t think control is, one, what the Founding Fathers were talking about. Two, I don’t think gun control helps anything. The guy that shot up the Orlando Pulse Nightclub had a legal firearm. That’s a mental health issue right there.”

Another staple offered to stop urban crime – the gun buyback – likewise, falls by the wayside in Toure’s view.

“Gun buybacks just help the community ‘feel’ a little bit safer but it doesn’t help. Feeling and what the facts are are two different things, you know what I mean? And, you know, the gun buybacks – the question becomes, ‘Okay, well, what are you doin’ with the firearms?’ None of that stuff helps,” Toure said.

What does help, and the mantra for his group, is education and information.

“What we’re doing at Black Guns Matter is going into the grimiest places. I’m from North Philly which is always in the top whatever for murder,” he said. “Going into those neighborhoods and saying, ‘Hey, single mother of three that gets off at 4:00 in the morning, this is how you secure a firearm safely so you can still feel safe in your home and at the same time one of your children that’s 5 years old doesn’t get a hold of that firearm and harm themselves.'”

Toure mentions the NRA’s Eddie Eagle Program training for young people as an example of needed firearms safety, “Hey, if you’re under a certain age if you see this firearm, this is what you do. You get an adult. You don’t touch it,” he said. “Education, information, and proper training are what help. Ignoring it, trying to put the guns away, acting like this isn’t the case, pretending like this isn’t a serious issue, none of that shit helps. None of it helps. What we’re doing is what’s helping.”

Guns.com asked Toure about his take on the dogma in large urban areas that if the powers that be make legal ownership very hard – such as in Chicago and New York City – that by reducing the number of legal guns in circulation it’ll translate into less crime, to which he disagreed.

“It hasn’t,” he said flatly. “We can look at the stats. It hasn’t. It has not. That is – to me – it looks like an attempt on an infringement on Second Amendment rights. That’s all it looks like to me.”

Toure said making legal guns harder to buy and possess is not the solution, and turns a blind eye to reality.

The disconnect, he feels, is with lawmakers, and the constituency needs to reconnect.

“The government works for the people. We do not work for them. It’s an interdependent mutually beneficial relationship,” Toure holds. “It’s not a, ‘You say this and we do it.’ And I think we have to get back to that. We have to get back to those principles that, ‘Listen, not only do I matter, you work for me now and we’re going to hold you to a standard.’ So no, that, ‘we’ll just make it harder for the actual good guys and good girls to get firearms’ – you don’t tell us what to do. We tell you what to do. We’re your constituents. We’re your base. We’re the people that elect you into office and if you can’t follow through with what we’re doing, you got to go. That’s what I think would change that.”

In the inevitable interactions between the community and law enforcement, Toure thinks the breakdown in communication needs to be addressed on both sides, with more training for police and, through more lawful carry of legal firearms by the black community.

“Everybody in the hood should have a firearm because they’re citizens and that’s their Second Amendment right. They’re not prohibited people – they go to work every day,” he said. “These are people that go to work every day, you know what I mean? So the aim is to really destroy the conversation. The aim is to make it be like breathing. I want it to be so foreign. I want it to be like me asking you the marital status of the number 7.”

In the case of Philando Castile, the licensed concealed carrier killed in a controversial officer-involved shooting in Minnesota earlier this month, Toure feels such incidents could be avoided.

“The officers need better training and sometimes we need better understanding of how to approach those officers because we can get frustrated as well,” he said. “You know, Mr. Castile was stopped some over 50 times, so he knew the protocol. That officer didn’t. So we don’t have to walk on eggshells. The officers need to respect the law that they say that they’re serving.”

Across the nation – and in urban areas in particular – illegal guns in the hands of honest people are never going away. While strict gun laws may push such acts underground, the guns will always be out there and are sometimes carried by those who would rather risk criminal penalties for having the gun, than to go unprotected and risk their life. A very real world, “I’d rather be judged by 12 than carried by six” bumper sticker backed up with actual people and events not of their choosing.

Toure knows that segment of the gun owning population, and knows the risk they take to interpret their own version of the Second Amendment. He also holds them up to be among the safest in the gun community out of a need for self-preservation. He equates them to those who drive without a license.

“They’re running a risk every time they get in their car just to feed their family, just to pay bills. They are the safest drivers that I know,” he said. “They stop at every stop sign. They stop at every red light. They are 10 o’clock and 2 o’clock, lookin’ left, right, left. That is because they’ve trained themselves to be safer because they’re not the bad guy. I think that when you create something that’s illegal and just based on what you think it should be as opposed to not factoring the peoples’ needs and responses, of course they’re going to be the bad guys in your eyes because they are technically doing something illegal.”

Besides his work in Philly, Toure is taking his group on the road, embarking on a 13-city tour to address the same situation in other urban areas. In the future, he hopes to make it a nationwide push.

“I mean, the hood is the hood everywhere,” he said.

Not backed by any organization, left, right or center, the group is pledging their own funds as well as raising money through merchandise sales and exploring crowd sourcing, but Toure feels the urgency is now to move ahead regardless of dollars.

“When those Founding Fathers said, ‘Yo, there’s tyranny over here,” they didn’t just wait to get the right funding,” he said. “You know, they started doing it. You know what I’m saying? It wasn’t, like, ‘Well, we got to wait.’ No, they started doing stuff. They started putting their own sweat equity and blood, sweat and tears into creating a situation.”