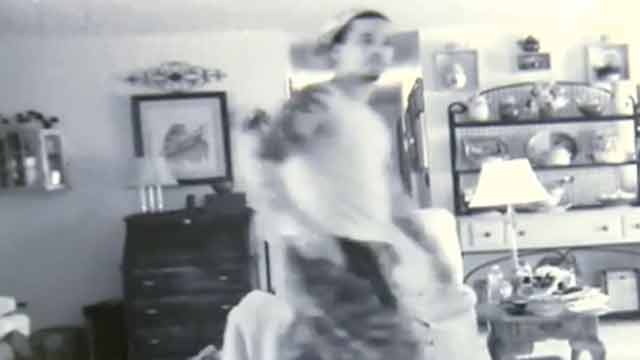 Mark Jones’ actions were captured on a security camera inside the couple’s home. (Photo: WLKY)

A 29-year-old man is facing multiple charges after he broke into a Brandenburg, Kentucky, home, stole several items, then shot the family dog before the resident returned home and held the man at gunpoint.

Ron Sheffield and his wife were enjoying an evening out on Friday, but their serene night was shattered once they returned home and realized they had been the victims of a burglary. The entire break-in was captured on the couple’s security cameras inside their home.

The video shows the suspect wandering through the home, collecting items in a large trash bag, while holding onto what was later determined to be a BB gun. As the suspect rummaged about, the couple’s dog, Shadow, could be heard in the video continuously barking. The suspect, who was later identified as Mark Jones, apparently became irritated with the dog and shot him with a BB gun. The dog’s yelps could be heard on the video, but still, he continued to bark.

Jones collected four antique pistols, a crossbow, a knife and a machete from the couple’s home. Shadow was still barking, so Jones first threw the knife at the dog, then took one of the pistols he had just stolen and shot Shadow. Soon thereafter, the couple came home.

Sheffield told local media in a recent interview that he immediately knew something was awry when he saw the front door was opened with the storm door closed. He said he knew it shouldn’t be that way, so he entered with caution, his handgun drawn and at the ready.

Once inside, Sheffield came face to face with Jones, who was still armed. Sheffield trained his gun on Jones and told him to get down.

He held Jones there until police arrived a short time later. He was arrested and charged with burglary, theft by unlawful taking, receiving stolen property and animal cruelty. However, the couple was rather disappointed to learn that less than a week after the break-in, Jones was released from jail on a $1,000 bond.

“It’s just like a slap on the wrist,” said Sheffield’s wife, obviously irritated about the situation.