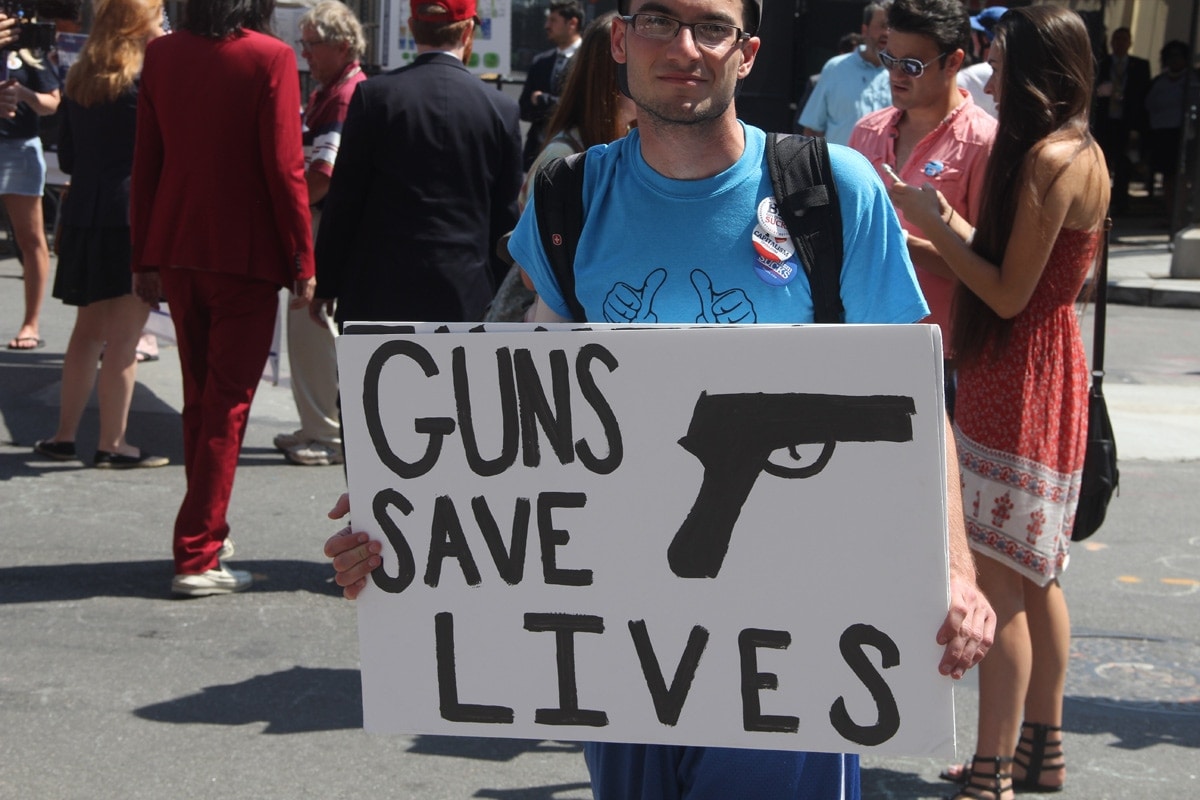 A demonstrator carrying around a sign stating “guns save lives” outside the RNC at the Quicken Loans Arena in Cleveland on July 19, 2016. (Photo: Daniel Terrill)

Although gun rights have barely been mentioned at the Republican National Convention, the platform gained attention twice from headliners on the event’s second night.

The first to mention it was National Rifle Association head lobbyist Chris Cox who reminded a chattering audience that guns will be a leading issue for Hillary Clinton during her presidential campaign.

“All the Supreme Court said was you have the right to protect your life in your own home. Hillary says they got it wrong,” Cox said, continuing the group’s 15th month campaigning against Hillary Clinton’s 2016 presidential bid.

“It’s that simple: a Hillary Clinton Supreme Court means your right to own a firearm is gone,” he added. The brief commentary was a way to discuss the Supreme Court nomination that be selected by the next president unless the U.S. Senate agrees to approve President Obama’s nominee.

Later in the event Tuesday evening, Donald Trump Jr., the Republican nominee’s oldest son, dedicated a minute or two to the issue, only adding greater detail into his embellished characterization of a Clinton’s actions as president.

“She says she’ll issue executive orders to take away Americans’ guns. She wants to appoint judges who will abolish the Second Amendment,” he said.

Their references are based on an excerpt of a Clinton speech in 2015 in which she was critical of the Supreme Court’s 2008 ruling on a handgun ban in Washington, D.C. The high court overturned the law in a 5-4 vote favoring the opinion of the late Justice Antonin Scalia.

The decision affirmed that the Second Amendment protects an individual’s right to own a firearm and extends the meaning to include self-defense. It also opened the door for challenges to localized gun control laws.

While Clinton’s stated efforts do not include outright abolishing the Second Amendment or banning all guns, she does promote sweeping gun control measures advocated by leading gun control groups.

Her platform includes hot-button issues like expanded background checks, repealing a federal law that protects gun companies from liability lawsuits, turning domestic abusers into prohibited buyers, and an assault weapons ban — all of which would still exist under the Heller decision.

According to an early assessment of the ruling, UCLA law professor and Second Amendment scholar Adam Winkler said, “About the only real change from Heller is that gun owners have to pay higher legal fees to find out they lose.”

He said language in the opinion allowed lower courts to uphold longstanding gun control laws like prohibiting felons, forbidding guns in sensitive places like schools or government buildings, and imposing conditions on the commercial sale of arms.

The NRA endorsed Donald Trump Sr. for president at its annual meeting in April. Although he has expressed pro-gun control views in writing and interviews, he seemingly abandoned those views and adopted concepts that align with the NRA’s.