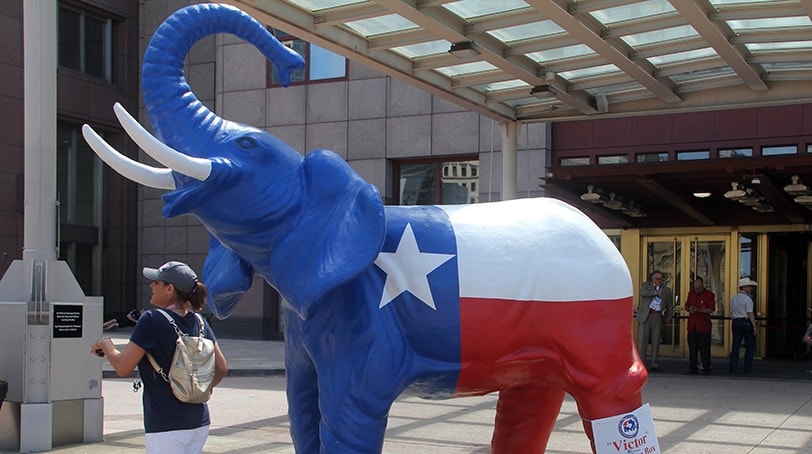 CLEVELAND – With the third round of speeches set to begin Wednesday, there was little mention of guns at the Republican National Convention. Next week’s Democratic convention in Philadelphia, however, is expected to be gun talk-heavy, with gun control groups making appearances at the nominating event.

Moms Demand Action and its parent group, Everytown for Gun Safety, are expected to draw hundreds of supporters with a focus on gun violence victims, the group said in a press release.

For Geoffrey Yoast, GOP alternate delegate from Oxford, Mississippi, keeping his son from becoming a victim is his chief concern and although Everytown says it isn’t anti-gun, Yoast is convinced the Democratic candidate it endorsed last month is.

Clinton has advocated sweeping gun control measures — as opposed to completely abolishing the Second Amendment like Trump and his ilk have said — but it’s not yet known if attempts to advance such legislation would be successful under a Clinton Administration.

Yet, Yoast has his eye on the next potential Supreme Court nominee. The person who fills the recently-vacated seat of the late Justice Antonin Scalia could potentially work to overturn the landmark District of Columbia v. Heller case, which protected home self-defense under the second Amendment.

“It sounds silly, but the gun control people — they want to take all the guns away from the good guys, then only the bad guys have them,” Yoast said. “We got guns in Mississippi, males and females have a weapon of some sort, so it’s not a big issue for us because the Second Amendment is not negotiable. We’re not dickin’ around with the Second Amendment. It is what it is and we’re going to stay true to that and we’ll fight you tooth and nail on that.”

So why so little mention of gun rights and the Second Amendment during the Republican convention?

Now, some terrible things have happened and the first thing Obama and people want to do is say ‘this wouldn’t have happened if we had gun control.’ Well, they’re wrong and I think that Republicans stand strong behind the Second Amendment.”

Cleveland is an open carry city and a lot of folks here have guns. I brought my weapon here. Of course, I drove. And I haven’t carried my weapon into the

“I think it’s been more of a ‘introduce Trump, make everybody feel good about Trump, vilify Hillary,'” Yoast said. “I don’t think that you’ve seen a lot of — it’s been more about terrorism and the lack of trustworthiness for Hillary. That’s kind of what we’ve seen so far.”

But it’s not for a lack of caring. The Republican party is strong on the Second Amendment, Yoast said. And it’s not because he thinks Republicans are winning on gun issues either.

“You haven’t heard anything about pro-life, pro-choice, pro guns or anti-guns and so I don’t think the party has any less support of the Second Amendment,” Yoast said. “I don’t think it’s by design as much as it is the hot-button things right now, which happens to be with terror, happens to be with the FBI coming out and lighting Hillary up, but saying she didn’t do anything illegal.”

But for gun control groups, Democrats and the party’s presumptive presidential nominee, gun violence prevention through gun control is the hot-button issue.

“In the midst of a summer of gun violence tragedies that have gripped headlines – along with the 91 Americans who are killed and hundreds more injured every day … (Hillary Clinton) has placed saving lives from gun violence at the top of her agenda.”