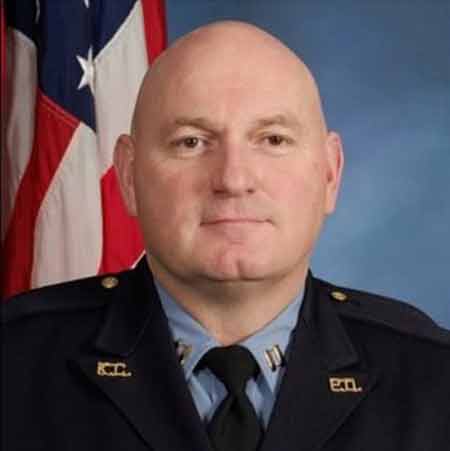 Reports of a disturbance from a Kansas City, Kansas, neighborhood Tuesday afternoon ended in gunfire and the city’s police captain dead.

Officers received the initial call just before 2 p.m. The caller stated the disturbance involved a vehicle and someone firing a gun. Within five minutes, officers – including the police captain – arrived on the scene and found several people immediately jumping out of a vehicle and fleeing from the scene.

Kansas City Police Capt. Robert David Melton attempted to track down one of the fleeing suspects, during which time the suspect fired into Melton’s patrol car, striking the officer through the window. Melton was rushed to the hospital, but succumbed to his injuries just before 3 p.m., the Kansas City Police Department confirmed in a news release.

Three of the suspects were taken into custody, although one was questioned and released. Authorities said at this time they have no reason to believe the shooting was a targeted attack.

Melton, who friends and family knew as Dave, had been with the department for 17 years and previously worked with the Wyandotte County Sheriff’s Office for another nine years. Melton was also a member of the Kansas National Guard and previously served in Afghanistan.

Melton’s murder came at the heels of an onslaught of officer deaths, the thirteenth officer killed in the line of duty this month alone, according to the Officer Down Memorial Page, which tracks deaths of law enforcement officers. Melton was also the second Kansas City Police officer killed in the line of duty in 10 weeks. Detective Brad Lancaster, with the Kansas City Police Department, was shot and killed in May while investigating a suspicious person.

Rep. Kevin Yoder called Melton’s death a tragic loss in a statement where he expressed his condolences.

“The tragic killing of our law enforcement officers must stop,” he said.