Rare Florida earthquake turns out to be Navy explosives test 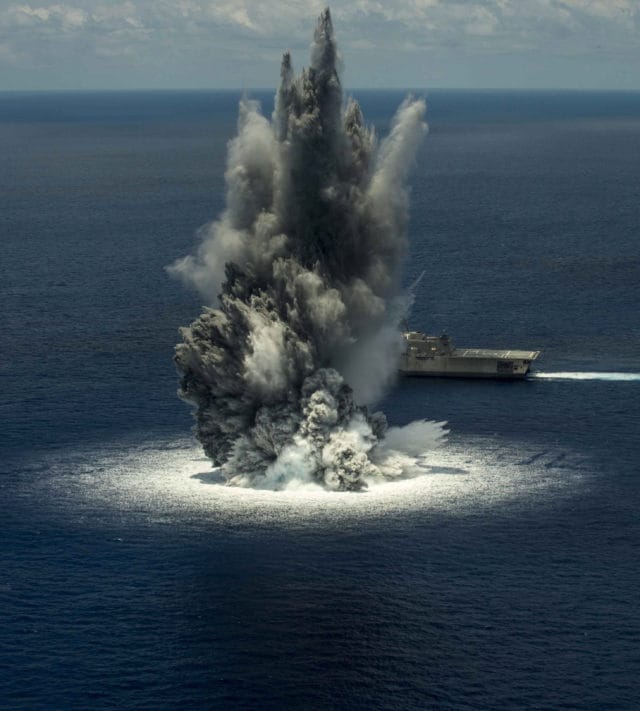 The littoral combat ship USS Jackson (LCS 6), shown here in the smallest of three scheduled shock tests, was the subject of a 5-ton underwater blast Saturday off the Florida coast that was felt by seismographs in Minnesota (U.S. Navy photo)

A small earthquake off the Florida coast Saturday was reclassified as an experimental explosion by the U.S. Geological Survey after the Navy announced it was just 10,000 pounds of explosives shock testing.

The “earthquake” was recorded some 104 miles East Northeast of Daytona Shores on the Sunshine State’s Atlantic coast and, as noted by local media, resulted in no damage on land or even reports that Floridians felt anything. Which isn’t a surprise as the quake, some 3.7 in magnitude, was a small one– but it did register on seismographs as far away as Minnesota. The event was newsworthy in respect that tremors in Florida are rare, with the last ones of any size being reported in 1879.

However on Tuesday, as reported by the Daytona Beach News-Journal, the Navy stepped in and announced that it was simply conducting explosive shock testing on the new Independence-class Littoral Combat Ship USS Jackson (LCS-6) which has been undergoing a series of trials to test the ship’s capability to withstand underwater explosions such as in the above image.

Among the myriad of roles LCS ships such as Jackson are envisioned of completing is mine sweeping.

Accordingly, the USGS has since reclassified the event as an experimental explosion.