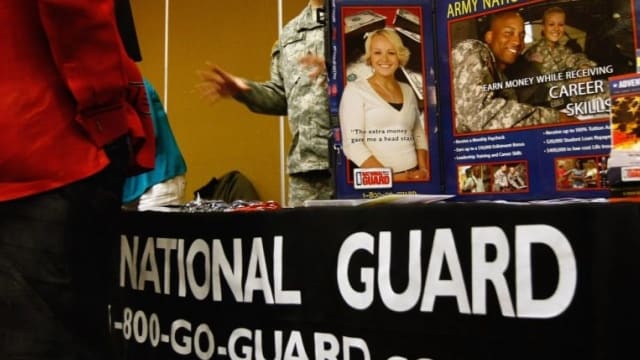 New York may soon join at least seven other states that have expanded protections for their National Guard recruiters (Photo: WBUR)

Legislation to supply employees at New York National Guard Recruiting offices and ROTC Centers with sidearms or concealed carry permits is halfway through the legislature.

The proposal, introduced by Senate Republicans last summer after the terror attack on a Naval Reserve center in Chattanooga, Tenn., passed that body in a resounding 60-2 vote last month and is now in the New York State Assembly. The only two lawmakers to oppose the bill were Sens. Bill Perkins of Albany and Velmanette Montgomery of Brooklyn, both urban Democrats.

“This measure is, unfortunately, a reflection of the society we live in with imminent threats to our nation and communities becoming more and more prevalent,” said sponsor, State Sen. Rob Ortt, in a statement. “Unarmed soldiers, such as members of the National Guard and ROTC, are targets on domestic soil and need stronger defense policies in place to safeguard them as they protect us. This bill provides these brave individuals with the tools they need in order to keep them safe from active shooter situations or domestic acts of terrorism.

Ortt’s bill, S6021C, would direct the New York State Division of Military and Naval Affairs (DMNA) to take a number of steps to protect Guard and ROTC centers in the Empire State. Among these would be to either provide sidearms for those full-time personnel assigned to work at those centers or issue them permits to carry their own concealed handguns. Currently, those assigned to these installations are unarmed.

In addition to this, DMNA would be ordered to make such facilities hard targets with the addition of metal detectors, bullet resistant glass, surveillance equipment, and barricades.

In the aftermath of the Chattanooga attack many states moved to expand protection for their National Guard facilities and drop gun free zones.

Ortt’s measure was transferred to the Democrat-controlled Assembly last month, but is currently not scheduled for debate as it recessed on June 17 for the rest of the year.

“It’s critical that the Assembly acts on this bill to prevent future tragedies,” said Ortt.