Police can now shoot down drones over Utah wildfires 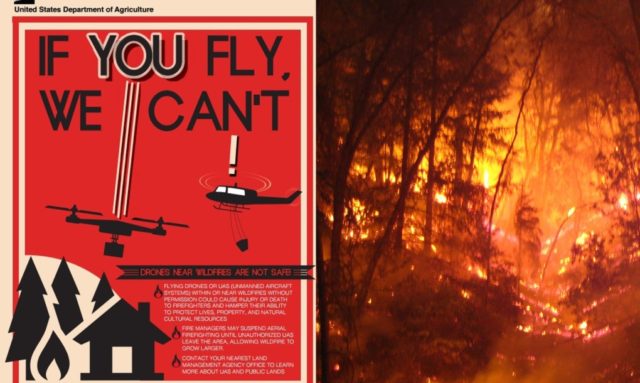 During a wildfire in Washington County, Utah in June, authorities suspended water-dumping aircraft sorties after the flight zone became crowded with unmanned drones. (Photos: U.S. Department of Agriculture via Inhabitat)

In certain circumstances, law enforcement officers can now “neutralize” some unmanned aircraft after signature of a bill by Gov. Gary R. Herbert this week.

The Republican-backed measure allows enhanced penalties for operating a remote control drone in flight restriction areas during wildfires and grants the ability for police to bring violating quad-copters and the like down. It passed the House 67-6 on July 13 and the Senate 25-4 on the same day. Herbert signed the proposal into law on Sunday, saying it was brought about after drones hampered efforts to combat a wild fire earlier this summer.

“Public safety has always been my top priority and this new law will allow us to more effectively fight wildfires,” said Hebert in a statement. “We are not going to tolerate reckless drone interference during wildfire season. With this law, Utah has taken the necessary precautions to protect our emergency management personnel and prevent additional interference that compromises public safety.”

The new law, which passed the legislature as H.B. 3003, modifies Utah’s codes concerning unmanned aircraft by allowing for second-degree felony charges for operating a drone near an emergency aircraft in a wildfire aviation zone, which carry as much as 15 years in prison and a $15,000 fine. Further, language in the act allows the local incident commander to order the aircraft “neutralized” by means of disabling or damaging, taking control of, or otherwise interfering with the drone.

While Sen. Evan Vickers, R-Cedar City, the law’s Senate sponsor, says that shooting down the aircraft is allowed under the measure, Utah state police and the National Guard have technology available to bring such devices down through jamming.

During the series of wildfires in Washington County in June, no less than five private remote control drones repeatedly interfered with firefighting operations, at one point nearly crashing into an emergency aircraft, coming within feet of a helicopter on a water-dumping flight and forcing its recall.

“This is an attack on the safety and well-being of our flight crews and our aircraft,” said Chris Henrie, fire incident commander at the time, as reported by the Salt-Lake Tribune. “This stopped a significant effort to protect the residents of Pine Valley and could have killed our flight crew.”

As the measure passed with at least a two-thirds majority of the legislature, it took effect upon Hebert’s signature.