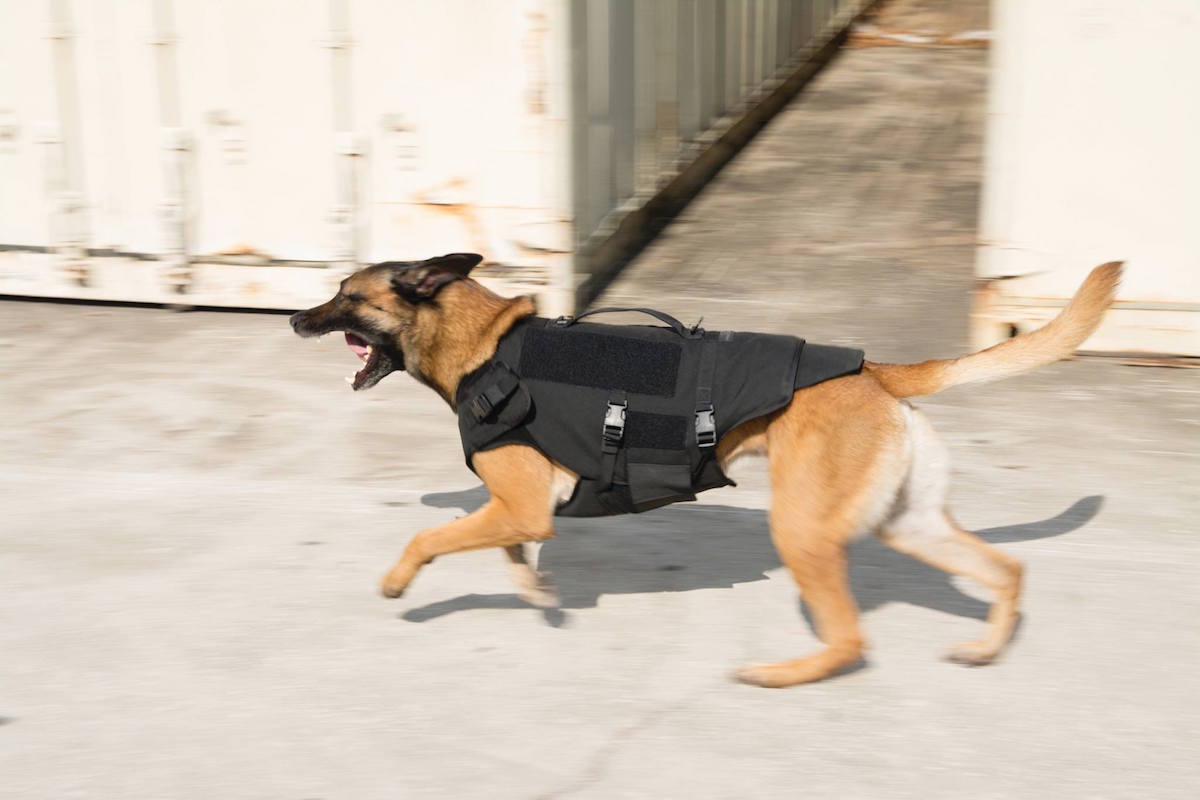 Designed to meet the needs of police dogs, the new Protech Tactical Bark-9 carrier by Safariland gives working canines flexibility and maneuverability through a lighter and more compact design.

The carrier meshes breathability with durability by using a 420-denier Cordura diamond ripstop nylon and reinforced stitching. The two in conjunction reduce overall wear and tear, resulting in a longer lasting and more durable carrier.

Though the Bark-9 covers the chest of the animal, a detachable spine extension offers 2-inch ballistic overlap for even more protection. Pair that with modular webbing for video equipment mounting and a restraint handle with 1 inch D rings for adjustable leash attachment points, and handlers have a fully kitted out tactical canine at the ready.

Four ballistic packages are up for grabs and accommodate a variety of missions and requirements. While black is the standard color on the carrier, which starts at $1,140, other colors are available upon request.

The load-bearing Bark-9 was designed to fit the needs of police departments who’ve seen a transition in the types of dogs in their employment.

“With the demand for canine officers increasing and threat levels at an all-time high, this top-of the line carrier delivers the necessary protection with maneuverability,” said Brian Santimauro, Category Director of Tactical Armor, in a press release.

He emphasized that though this gear is intended for dogs, the same quality and testing was put into the Bark-9 as any other ballistic vest.

“The Bark-9 tactical carrier was designed with the same passion and innovation as our products for the human officer,” he said.

Safariland partnered with several U.S. law enforcement agencies during the testing phase of the equipment to get real feedback from handlers. Comments and suggestions were heard by the company and integrated into the carrier’s final composition.

Though dog’s have been man’s loyal companions for thousands of years, police dogs first hit the streets alongside cops in the late 1890s in France. Germany, not long after, adopted the idea and began experimenting with breeds. Ultimately, the German Shepherd, a favorite among police forces today, was selected as the country’s policing breed for its adaptiveness and intelligence. Modern police dogs now tackle a variety of missions to include detection, patrol and search and rescue.

As dogs take on a bigger role within departments, the potential for injury and death rises. According to the Officer Down Memorial Page, a group that tracks police officer deaths in the U.S., 24 K-9s have died in 2016 thus far. Eight were gun related. Last year 27 police dogs died with only four gun related deaths reported.