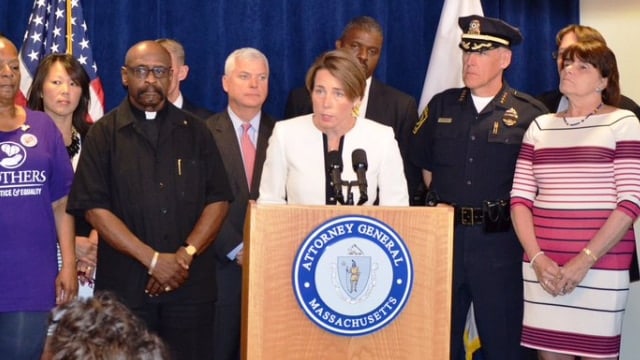 Massachusetts state Attorney General Maura Healey this week announced she is going after anything that acts assault-weapon like in the state, with an interchangeability test on gun actions as a tool in her hunt. (Photo: Healy’s office)

Gun rights groups are weighing their next move following Attorney Gen. Maura Healey announcement halting the sale of many types of “Massachusetts-compliant” semi-auto rifles this week.

On Wednesday, Healy declared that she was banning the sale of “copycat” rifles that shared common parts such as triggers or bolt carriers with AR-15s, AK-variants and others on the Commonwealth’s prohibited “assault weapons” list, saying that as many as 10,000 had been legally sold in the state last year.

Healy, a Democrat and the nation’s first openly LGBT state attorney general, last month openly called for reinstatement of the federal assault weapon ban that expired in 2004 following the terror attack on the Pulse gay club in Florida. Massachusetts is one of seven states to maintain their own local ban, of which Healy is attempting to strengthen.

“It’s no surprise the Orlando killer chose an AR-15 style assault rifle,” wrote Healy in an op-ed published by the Boston Globe. “It’s a weapon of war, originally created for combat, and designed to kill many people in a short amount of time with incredible accuracy. It’s in the same category as weapons chosen by killers in Newtown, Aurora, and San Bernardino. These are not weapons of self-defense. They are weapons used to commit mass murder. And they have no business being in civilian hands.”

Her move, focusing on gun actions — which are the heart of a weapon platform rather than cosmetic features such as stocks and grips — is an innovative escalation in firearm prohibition. It also has local Second Amendment groups crying foul.

“For nearly 18 years since the passage of the 1998 Gun Control Act firearm retailers, gun owners and state agencies have been operating under the same interpretation,” said Jim Wallace, executive director of the Massachusetts based Gun Owners’ Action League in a statement. “Now, suddenly, without warning or any due process a single person with a clear political agenda decides to change the rules. All Massachusetts residents should be alarmed!”

Wallace said Healy’s four-page guidance on just what is banned moving forward is confusing and open to interpretation, an ambiguity that may lead gun owners and the state’s 350 licensed dealers unwittingly on the wrong side of the law.

“Virtually every semi-automatic that utilizes a detachable magazine has the same operating system or firing mechanism, so what does this mean?” he asked. “The short answer is we simply don’t know. Our best advice to firearm retailers for now is to err on the side of caution. These new rules may cover a lot more than just what we might think.”

Guns.com reached out to the National Shooting Sports Foundation, the trade association for the firearms industry, who advised they are assessing Healy’s new mandate.

The National Rifle Association, in an alert from their Institute for Legislative Action issued on Thursday, advised that Healy, “has over stepped her boundaries as Attorney General and created a new definition outside of the statute that currently regulates so-called ‘assault weapons’ in Massachusetts,” and is ” looking into the legal options available to fight this egregious attack.”

“The human cost of allowing civilians to acquire weapons of war is far too high and millions and millions of dollars have been spent on physical, structural and emotional recovery of our community,” said Po Murray, chair of the Newtown Action Alliance, in a statement. “It is not surprising that the profit-driven gun makers are attempting to circumvent the assault weapons ban by manufacturing copies or duplicates of banned weapons.”

Gov. Charlie Baker, a Republican, has in the past said he does not support the federal gun ban but has not issued a public statement on Healy’s actions, though a Change.org petition asking him to block her efforts has gained some 12,000 signatures overnight.

Meanwhile, with Healy’s warning that rifles purchased on or before July 20 would be grandfathered, gun shops in the Commonwealth reported brisk business.

“It seemed like it made a lot of sense to come and get an AR-15 today,” said Bruce Sterling who, as reported by local media was part of the long line at the Four Seasons shop in Woburn to purchase one.

“This is not going to save any lives,” said Mathew Colson, a gun collector. “This is but a political ploy just to prove a point, the point being she can do whatever she wants.”