Germany: At least 8 dead in shootings in Munich area 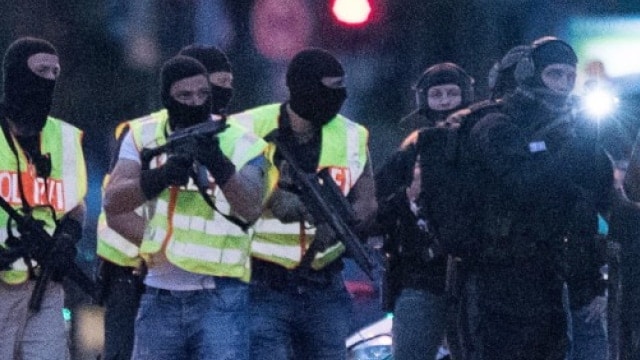 Both Federal and local police forces are converging in Munich for an active shooter event that has so far resulted in at least 8 deaths as confirmed by the Munich Police. (Photo: SZ.de)

The third largest city in Germany and the capital of Bavaria on Friday suffered from separate attacks at the Olympia Einkaufszentrum mall and the Karlsplatz U-bahn metro station in Stachus Square.

German Federal Police and the Munich Polizei have been issuing statements in four languages, advising that at least eight fatalities have been confirmed and that public transportation including trains, tramways and buses have been halted in what is an ongoing active shooter event.

The initial attack, as reported by Suddeutsche Zeitung, a large Bavarian daily newspaper, began at a McDonald’s restaurant near the Olympia mall. A subsequent attack was reported at the metro station about three miles away some 20 minutes later.

Authorities are reportedly looking for multiple suspects armed with handguns and are advising citizenry to avoid public places. Officials are treating their response at that of one to a terror attack, though they are cautious thus far to label the incident as such.

The crack German anti-terror unit GSG9, ironically founded in the aftermath of the 1972 Munich Olympic terror attack, is reportedly en route to the incident.

It should be noted that early information from such events, especially casualty estimates, is often wrong. Munich Police have advised that at least one of the dead, an apparent suicide, may be the shooter and could be the only suspect.

Firearms in Germany are very tightly regulated, requiring licensing and registration, strict background checks and limits on where and when gun owners can shoot.

Further, the EU is seeking to step up gun laws on everything from black powder muzzleloaders to alarm guns and replicas. In Scotland, authorities are currently urging air weapon owners to register their guns or turn them in pending upcoming restrictions on that class of gun.

There have been some reports that the German government and twitter have been working together to suspend the accounts of those posting eyewitness photos and video of the incident and the Munich Police is asking social media users to not upload such images, to instead send them to authorities to help with the investigation, and to avoid speculation.

Important:
Please don't publish Fotos/Videos of #gunfire #Munich.
Please help us and send these files to us underhttps://t.co/29Df0qGgM6

Please restrain any speculations – that would help us a lot! #München, #oez, #Schießerei

The U.S. State Department has posted a number for those concerned about U.S. citizens traveling and American expats living in the Munich area while Facebook has an active safety check.

Haven't heard from a US citizen in #Munich? Direct phone inquiries for missing persons to 0800 7766350 to reach @PolizeiMuenchen.

They are also advising Americans to stay away from the consulate and shelter in place until the all-clear has been given.

At this time, U.S. citizens are advised not to go to the U.S. Consulate in Munich due to the uncertain security…

This is a developing story.