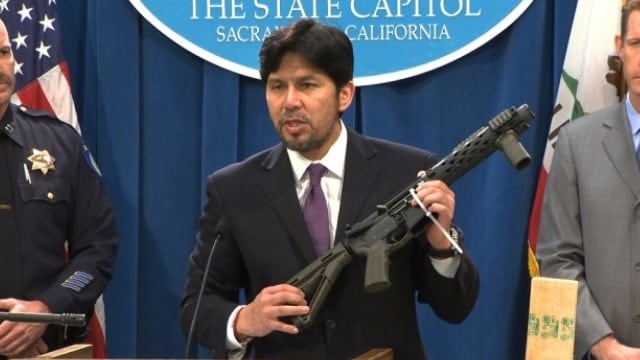 Sen. Kevin de Leon managed to conjure enough versions of his old “This is a Ghost Gun” legislation back from the grave and lead it through to a signature by Gov. Brown. (Photo: KCRA)

Although he vetoed almost identical measures earlier in the month and in 2014, California Gov. Jerry Brown signed a bill requiring extra state requirements on homemade guns.

The measure, AB 857, was introduced by Asm. Henry Perea, D-Fresno, to enact clean vehicle rules for trucks, buses and off road vehicles. However, Perea, who led the moderate bloc of lawmakers in the chamber, announced last December he was resigning his seat to become a pharmaceutical lobbyist. This left the legislation he introduced before leaving office to be hijacked, gutted, and amended as part of a bevy of tough anti-gun proposals pushed by Senate President Pro Tem Kevin de León.

Approved by the legislature in late June along with a near twin measure, AB 1673— which in the end was vetoed by the long term Democrat– Brown signed AB 857 on Friday without comment along with a long list of other measures.

The new law, set to go into effect in January 2017, changes the definition of a firearm under California law to include, “an unfinished frame or receiver that can be readily converted to the functional condition of a finished frame or receiver.” Such raw components would have to be regulated in the state just like other guns including having a serial number registered with the Department of Justice, transferred through a licensed dealer, and fall under DROS fee schedules and waiting periods for first-time buyers.

In 2014, Brown vetoed De Leon’s infamous “Ghost Gun” legislation, which would have added adding multiple layers of regulation to the process of building homemade guns that are already legal under federal law. Moreover, it would require all guns, even antiques and homemade weapons, made after 1899 to have a serial number. At the time, Brown said that, “I appreciate the author’s concerns about gun violence, but I can’t see how adding a serial number to a homemade gun would significantly advance public safety.”

Last month Brown again scuttled a rehash of De Leon’s bill that was very similar to both AB 857 and AB 1673, leading to confusion as to why three attempts at regulating homemade guns were rejected by Brown while a fourth almost identical measure made it through to law.

“Today’s action by Governor Brown shows how craven California’s despotic ruling class has become,” said Firearms Policy Coalition President Brandon Combs in a statement emailed to Guns.com. “The Legislature has abandoned the Constitution, representative government, and the People of California. I fully expect the People to respond in kind.”

In a letter to Brown urging a veto, FPC argued that, “In addition to many other terminal issues presented in the bill, AB 857 fails to conform its exemptions to federal law, thereby placing potentially hundreds of thousands of good, law-abiding people at the mercy of an unconstitutionally vague criminal statute.”