An Ohio man who was refused a gun purchase was told by Second Amendment groups to be patient and see what happens with the stagnant appeals process or to hire a lawyer.

He went with the latter.

Gregory Ledet tried to purchase a firearm through a licensed dealer on Feb. 27 and his National Instant Criminal Background Check System check – also known as NICS and performed by the Federal Bureau of Investigation – came back denied. After a week of effort to find out why he was turned down, the FBI informed Ledet that he was a prohibited firearms possessor.

Under federal law, those found guilty of non-domestic violence related state misdemeanors punishable by over two years in prison, among others, can lose their gun rights. Ledet’s criminal history consisted of a misdemeanor theft under $100 charge in 1997 in Louisiana for which he received a six-month suspended sentence in lieu of 18 months probation, meaning he should not have been denied.

Court records show the FBI was sent this data as early as 2003.

After working with the Louisiana State Police and the parish court clerk for the area, his decades-old conviction was processed to update his records with the FBI through an appeal. Ledet again attempted to purchase a firearm and was once more denied. Filing a second appeal in April, he was informed the “NICS Section is currently processing cases received in July 2015” inferring that he could expect more than a year’s delay before his case came up for review.

He had previously filed two other appeals dating as far back as 2010 that had gone unanswered.

“I knew that I was not a prohibited person, but the FBI had my records wrong and since they were not processing appeals, I had no way of correcting the record,” Ledet said in an email to Guns.com. “I even tried to contact CJIS (Criminal Justice Information Services) about correcting the record, but they instead sent my request to NICS who threw it into a pile with everyone else.”

Ledet tells Guns.com he then reached out to national and state gun rights groups including Gun Owners of America, the Second Amendment Foundation, thet National Rifle Association and the Buckeye Firearms Association, who in turn advised him to either be patient and let the appeals process lurch forward or hire an attorney.

On the grounds that the federal government was unlawfully depriving him of his constitutional rights, Ledet retained attorney Stephen D. Stamboulieh and filed suit in the U.S. District Court for the District of Columbia in May.

Then, on July 12, Ledet was sent a letter by the FBI stating, “Based on further review and investigation, we have been able to determine you are eligible to possess or receive a firearm,” and he was issued a CJIS certificate for future reference.

“From the time we filed the suit to the date of the letter, you’re looking at 65 days,” said Ledet. “From the time the DOJ filed an appearance to the date on the letter was just three weeks. That means that within 22 days, the FBI processed four separate appeals that I’ve had in place going back to 2010.”

In recent years, the NICS appeals process has been bogged down. As previously reported by Guns.com, the backlog of appeals has petrified as personnel have been temporarily reassigned to assist in running initial criminal background checks because of the recent surges in gun sales.

“While we are certainly pleased with the result, the length of time for appeals is yet another roadblock set up to deny people their fundamental right to keep and bear arms, and it should not have taken an attorney to prove that he was not a prohibited person,” noted Stamboulieh, who has similar cases pending in the courts.

Ledet, gratified that he won his case, still thinks gun rights groups can do more. Specifically, that they could and should flood the courts with suits to force the FBI to process appeals for would-be gun owners unjustly denied their Second Amendment rights to purchase a firearm.

“We, as a society, cannot sit idly by while the administration stomps on our constitutional rights and only gives justice to those that have the thousands of dollars to spend on a case like this,” Ledet said.

And now, for the most tragic part of the story: Mr. Ledet attempted to purchase a Ruger 10/22 over the counter from a licensed gun dealer Thursday night. We say attempted because he got a “delay” on his NICS check. 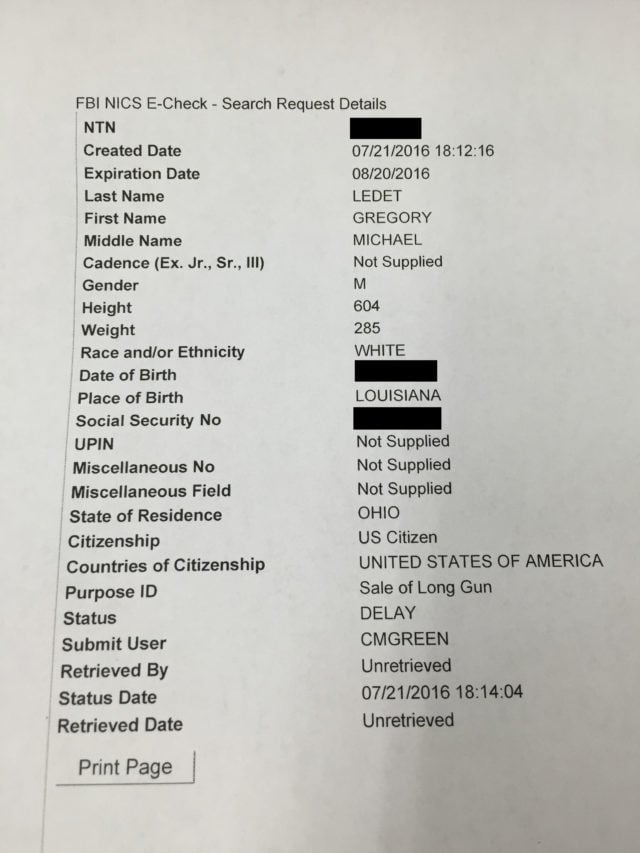