Mass. semi-auto crackdown results in 2,549 rifles sold in one day 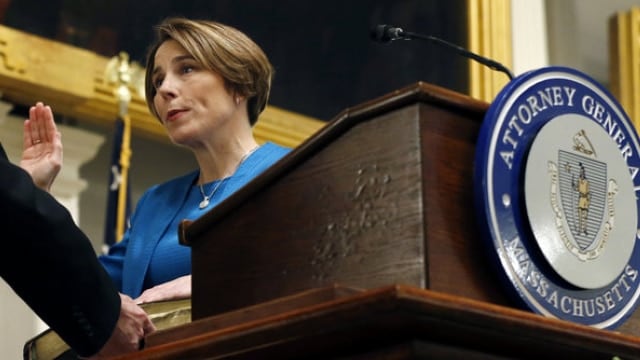 Massachusetts Attorney General Maura Healey, just over a year in office, may have become the best gun seller in the state’s history. (Photo: Elise Amendola/AP)

A unilateral decision by Massachusetts Attorney General Maura Healey to reinterpret the state’s laws on “assault weapons” resulted in a great day for gun shops statewide.

With roughly eight hours notice on Wednesday, Healy announced that she was immediately banning the sale of “copycat” rifles in the state that she felt violated the spirit of the 1998 Massachusetts assault weapon ban. Her method of reasoning focused on gun actions that are the heart of a weapon platform rather than cosmetic features such as stocks and grips.

The problem is that Healy inadvertently boosted sales of the very rifles she intended to prohibit as a rush on gun stores occurred, in some cases with customers queuing in lines that stretched out the door. In some cases, stores remained open late into the night, only closing when they ran out of inventory.

According to information from the Mass Firearms Records Bureau, some 2,549 rifles were sold Wednesday, compared to just 132 on Tuesday and 51 on Monday.

Gun rights groups staged protests Thursday and plan more for this weekend, cautioning they are not intending to go down without a fight.

“I’ve been looking at the reactions that’s been going on in social media and text messages I’ve been getting, and I think that Maura Healey really stepped in it,” Massachusetts Gun Rights President Christopher Pinto told the State House News Service. “This is like the day of infamy for Maura Healey. She’s going to awaken the sleeping giant of gun owners in Massachusetts.”

The editorial board of the Union Leader and the Boston Herald have since published scathing criticism of the AG’s actions, noting that rifles have been used on only two out of 779 homicides in the state in the past five years and that she lacks authority to rewrite the Commonwealth’s gun law.

“If you want to fine-tune the law, get the Legislature to do so. It’s why it exists,” noted the Herald, who pointed out that representative Cyndi Roy Gonzalez acknowledged that the AG’s office had not researched crime statistics before moving to reinterpret the law.

While lawmakers are already rallying supporters against Healy’s actions, gun owners across the state are seeking to tap in Republican Gov. Charlie Baker – who in the past has spoken out against the long-expired federal assault weapons ban – flooding his office and social media accounts with calls to take on Healy.

Baker for his part has waffled this week, first endorsing the Attorney General’s actions Thursday on WGBH Radio during his weekly “Ask the Governor” segment where he said she had the “authority and jurisdiction” to change the interpretation of the state’s assault weapon ban, then later the same day issuing a statement saying, “Given that her recent action potentially leaves tens of thousands of law abiding citizens open to criminal charges, I believe it is important to protect those who purchased firearms they understood to be legal on or before July 20th of this year.”

Meanwhile, a group seeking to impeach or recall Healy has gained nearly 1,500 members.