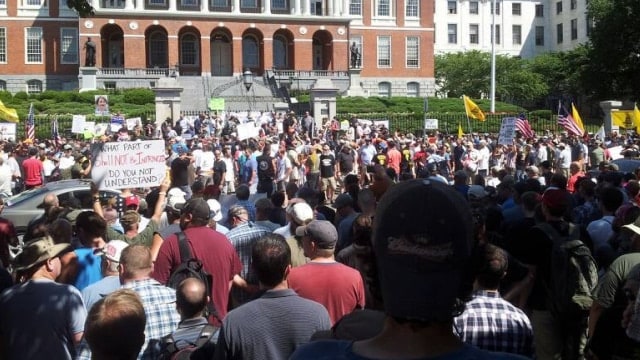 A group of 48 House and 10 Senate members are taking Massachusetts Attorney General Maura Healey to task for her efforts to ban “copycat” AR-15s and AKs as protests from gun owners mount.

With roughly eight hours’ notice last week, Healey announced that she was immediately banning the sale of rifles in the state that she felt violated the spirit of the 1998 Massachusetts assault weapon ban. Her method of reasoning focused on gun actions that are the heart of a weapon platform rather than cosmetic features such as stocks and grips.

This led state lawmakers, including 40 Republicans and 18 Democrats, to register their concerns with Healey directly.

“For the last 18 years, the law has been implemented and enforced consistently, both by your office and your predecessors,” the letter states. “Your new directive, which has been presented by your office as nothing more than a closing of ‘loopholes’ in the current law, appears in fact to be much more than that: the enforcement of a whole new law that unfairly infringes on the Second Amendment rights of law-abiding gun owners in Massachusetts.”

Some are going further.

State Sen. Don Humason, R-Westfield, says that Healey has overstepped her mandate under the Commonwealth’s laws, and plans on filing legislation to help keep the AG in check. As reported by Mass Live.com, Humason’s measure would strip from Healey’s office the ability to issue rules and regulations on firearms sales in Massachusetts.

“I was very surprised by the Attorney General’s unilateral approach towards changing the impact of an 18 year old law without seeking public input or consulting legislators,” said Humason in a statement. “This letter is just one of the ways we are working to support law-abiding Massachusetts residents’ civil rights protections.”

Lawmakers are undoubtedly receiving pressure from gun owners, who are organizing in protest over last week’s mandate that saw a staggering 2,500 newly banned rifles sold during a single business day. A protest Saturday at the state capitol sponsored by the Gun Owners’ Action League drew huge crowds.

Besides the normal retinue of politicians, former New England Patriots left tackle and Pro-Bowler Matt Light showed up to address the crowd.

Some among the state’s 350 licensed gun dealers feel that Healey’s mandate, should it stand, could force them out of business.

“There are men who have put 30 years into their gun store who potentially will have to shut their doors because the mandate cripples them,” Korey Freeborn of Commonwealth Firearms and Training Centers in Somerset told the Fall River Herald News. “It’s really not a good feeling to know if you walk into work and sell a certain weapon you could get a criminal penalty when it was never made explicitly clear what you can and cannot sell.”

A Change.org petition to terminate Healey has almost 800 signatures while a group seeking to impeach or recall Healey has gained nearly 2,800 members.