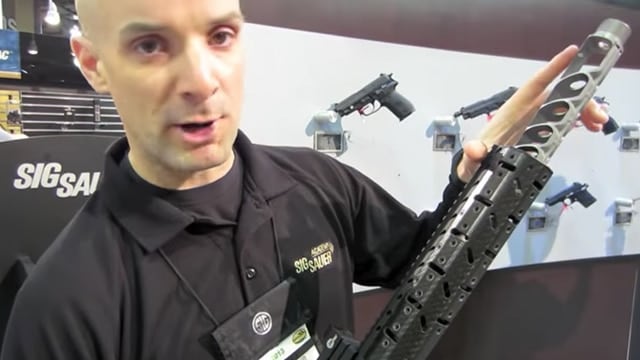 The internal component of a silencer is still what makes the device a silencer, despite New Hampshire gun maker Sig Sauer re-stating intentions for the device in a federal appellate court.

A three-judge panel in June upheld the ruling defending the Bureau of Alcohol, Tobacco, Firearms and Explosives classifying a 9.5-inch muzzle device as a silencer rather than a muzzle brake.

According to court documents, the gun maker welded the component called a “monolithic baffle core” to a barrel so it met the legal minimum length for rifles and had intended for consumers to use the device as an accessory that mitigates recoil.

The panel sided with ATF’s argument that the design had features “intended only for use” in assembling or fabricating a silencer, and the silencer component “does not share the design features typical of other muzzle brakes.” According to statements made in court, the component in question allows propellent gases to expand when encased whereas a muzzle brake allows them to escape.

The panel also acknowledged the ATF’s performance review of the device, which points out that any additional weight on the muzzle end of a barrel would help mitigate recoil; a pistol-caliber rifle does not need a muzzle brake nor are they typically sold with one; and unlike a traditional muzzle brake, the device would re-direct hot propellent gases onto the user’s hand every time a round is fired.

“Sig Sauer does nothing to rebut these findings,” the ruling said, adding the company failed to offer reasons why the court should favor its technical evidence over ATF’s interpretation and depictions of muzzle brakes in the administrative record.

ATF argued selling a silencer without a cover would allow consumers to skirt the federal law prohibiting the item. The National Firearms Act regulates silencers, machine guns, short barrel long guns and any other weapons by imposing a $200 tax as well as a lengthy application process. Failing to comply with NFA regulations can result in serious criminal penalties.

The ruling said the NFA defines a silencer as “any device for silencing, muffling, or diminishing the report of a portable firearm” and “any part intended only for use in … assembling or fabricating” one.

“It is hard to believe that Congress intended to invite manufacturers to evade the NFA’s carefully constructed regulatory regime simply by asserting an intended use for a part that objective evidence in the record — such as a part’s design features — indicates is not actually an intended one,” the ruling said.

Sig introduced the device at the 2013 Shooting Hunting Outdoor Trade Show as a feature on the MPX, a carbine chambered in 9mm. At the show, company representatives described the firearm as equipped with an integral suppressor minus the cover, or “can,” so owners would have to take the necessary legal steps before modifying it.

In the footnotes of the appellate court’s ruling, the panel referred to published works mentioned in case briefings submitted by ATF that describe the device a silencer core which Sig would “happily sell one of the casing to turn the part into a silencer.” However, the court did not rely on them since they were not a weighted part of ATF’s argument.

At a hearing for the original case last July, the judge presiding over the case described the agency’s classification as accurate because the item contained features necessary for the function of a silencer but superfluous for a muzzle brake. Yet, he did not immediately defer to the ATF’s ruling because the agency failed to prove that Sig intended to circumvent federal law by mislabeling the item. The judge published his opinion two months later calling ATF’s classification a rational conclusion.

In August 2013, the ATF Firearms Technology Branch issued a classification letter stating that the configuration “does not change (the component’s) design characteristics or function.” Four months later, Sig appealed arguing without a can, the device actually amplifies the sound of a gunshot — an argument rejected by both ATF and court because they were concerned about its performance while encased. The company filed suit in April 2014 beginning an 18-month court battle.