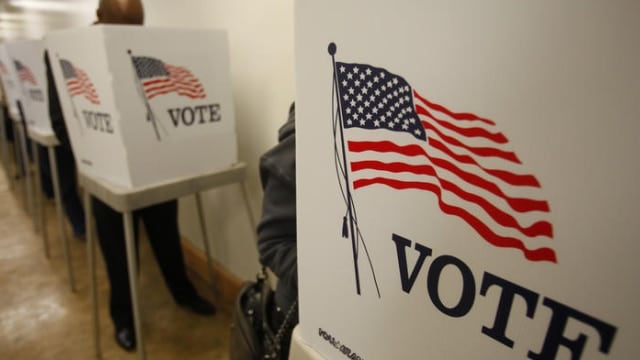 Californians at the polls on November 8 will see a host of propositions before them — that may include some to roll back recently signed gun laws. (Photo: Mark Boster/ Los Angeles Times)

The attorney general of California has prepared the title and summary for six referendums on the ballot in November to repeal a gun control package recently signed into law, and a seventh is in the works.

On Monday, Attorney General Kamala Harris’ office issued titles and summaries to the six proposals, clearing the path for petitions to circulate.

“We are just receiving title and summary on the first six now,” Bahrami, who is trying to raise 450,000 signatures of registered voters on each petition to satisfy the 365,000 required by law before Sept. 29 to make the ballot, told Guns.com. “The printing presses will start rolling shortly.”

Besides those, Bahrami advised Guns.com that the Secretary of State’s office is set to receive a seventh proposition taking on Gov. Brown’s recent signature on AB 857, which mandates regulations on homemade firearms, on Tuesday. Another grassroots organizer who Bahrami identified as a Native American who is a potato chip salesman is spearheading that filing. The efforts began on a California-based gun forum, but have now moved to a dedicated website while the group’s social media account has some 8,000 followers.

With the titles granted, Bahrami and his fellow volunteers are eager to get to work on their “Veto Gunmageddon” effort, which he advises is gaining steam.

“We seem to have no shortage of volunteers and this would not be possible without them,” he told Guns.com. “We are focusing on organizing petition signing locations and asking those interested to sign up at our site. We will be announcing dates for the upcoming petition drive as soon as everything is in place.”

There are currently 17 approved ballot measures for the November 8 election, including Lt. Gov. Gavin Newsom’s Prop. 63 “Safety for All” initiative of gun control proposals similar to the pending laws that the Veto Gunmageddon group is seeking to overturn. Further, another 20 are currently circulating various non-gun related petitions besides Bahrami’s, leading to the possibility that California’s voters could have a hefty job to sift through propositions at the polls in a few months.