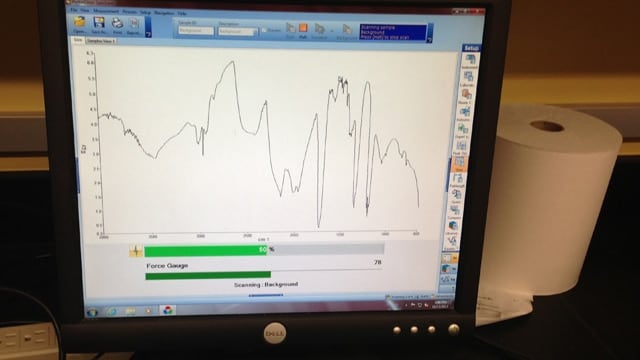 Data showing a baseline of chemicals used in the FireClean experiment in October 2015. (Photo: Everett Baker)

A defamation case against two bloggers who published test results showing the chemical composition of a gun lubricant is nearly identical to cooking oil was dismissed last week in federal court.

Citing a lack of personal jurisdiction, federal Judge James Cacheris rejected FireClean’s argument that Andrew Tuohy and Everett Baker conspired to attract readers in the company’s home state of Virginia by sharing a critical review likening its product to Crisco.

“Although such a conspiracy is logically possible, it is not plausible based on the facts in this record,” Cacheris said in his opinion and added whatever audience they had in Virginia was random. He also affirmed that the two did not originate the rumor but rather responded to it and he defended the ways in which they analyzed FireClean.

Tuohy, who published the initial test results, had the help of a chemistry professor at the University of Arizona who performed an infrared spectroscopy test to identify the product’s chemical makeup. Baker, a chemistry student who followed up on the report several weeks later, performed more tests with similar results under the guidance of doctorates in chemistry at his college.

In response to the judge’s decision, Baker expressed relief that the case was over and glad he could focus on his last year of school. “I feel good,” he said in an interview with Guns.com, adding that the lawsuit on top of school “was definitely tough, so I was glad to have just passed all my classes this year.”

On the other hand, FireClean, owned by brothers David and Edward Sugg, responded to the dismissal with a brief yet ominous message. “We are disappointed at the Dismissal on Personal Jurisdiction — we are not shocked but strongly disagree,” the company said in a Facebook post. “‘Without Prejudice’ means that we can and will continue the pursuit of justice.”

Acknowledging the possibility of another lawsuit, Tuohy expressed confidence that his work would withstand another challenge. “This is the third loss in a row for FireClean relating to this case – denial of their motion for jurisdictional discovery, denial of their appeal of that denial, and the dismissal of the case – with no victories to show on their side over the last four months,” he said in a statement on his website Vuurwapen Blog.

Tuohy said he explored the comparison, FireClean and Crisco, after hearing a rumor circulating online that had been started by a competing lubricant maker. George Fennell, owner of the company Steel Shield, described FireClean as Crisco and other cooking oils on multiple occasions while promoting his own product, Weapon Shield.

Both Fennell and his company were named in a separate defamation suit by FireClean on the same day it sued Tuohy and Baker. The judge presiding over Fennell’s case denied his attempts for dismissal, so they’ll soon enter the discovery phase. A pretrial conference is scheduled for next month.

Despite the looming threat of another lawsuit and the legal fees, Baker expressed optimism and said he’s dedicated to the scientific method and openness of that community.

“I think throughout all of this, no matter what happens, I’ve encouraged people to take their own results and to test stuff themselves instead of just relying on somebody’s,” he said. “I wanted to further the science of it.”

“Throughout this, I’ve tried to be a neutral voice,” he said about publishing his work on Granite State Guns. “In my original articles, I made sure to say ‘I’m posting this no matter what the results will be, so let’s find out together.’”